Homecoming queen gets a crown and a ring 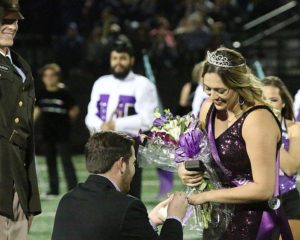 Under the Saturday night lights Wacey Horton, a Tarleton State graduate and agriculture teacher at Italy High School, proposed to his girlfriend of four years, Kayla Lucio.
Photo by The Flash Today

Tarleton State University kicked off its homecoming celebration on Oct. 14. With so many homecoming activities—smokestack lighting, yell contest and midnight breakfast going on— it left one of the homecoming queen nominees clueless to the surprise she was going to get at the football game. Under the Saturday night lights Wacey Horton, a Tarleton State graduate and agriculture teacher at Italy High School, proposed to his girlfriend of four years, Kayla Lucio.

Ever since they met in high school Lucio and Horton were best friends and did everything together, even both attending Tarleton. They were apart of the TTM program, served as Collegiate FFA officers together, were on Tarleton’s round-up executive board together, all while being involved in Greek with Lucio being a member of Alpha Gamma Delta and Horton in FarmHouse. “Our continuous involvement and shared passions is what has made us grow so much closer together over the years,” Horton said.

Horton had been planning this for months going through different scenarios trying to figure out the right one. He said, “I knew I wanted to make this happen at homecoming, but I wasn’t quite sure how. But when Lucio made the homecoming court I knew immediately how I needed to go about this.” In the moments before the proposal he said, “I was insanely nervous, I just kept telling myself, ‘Don’t fall and don’t mess up what you’re going to say’.” He shared that he had an outline of what he wanted to say to her but that as soon as he got to her he had no idea what he said.

Even with Horton’s elaborate planning Lucio knew something was going on, she just wasn’t sure exactly what. “I had a feeling something was up because I didn’t see him for two hours and he wasn’t there when I was walking onto the field,” she said.

Even though she was suspicious she explained to us that she was still very much in shock. She said “I remember thinking ‘Oh my gosh, this is not happening right now.’ I was overwhelmed, but in a good way. I didn’t even look at the ring until after I was off the field,” said Lucio.

The couple are both happy with how it all turned out and both expressed they would change nothing about how it happened. “I think he planned it the perfect way that he wanted it to be, and if he is happy with how it went I am, but I was a little shocked he did it in front of the whole university,” said Lucio

Horton shared that he would have still proposed even if she didn’t win homecoming queen. He said, “Of course I am so proud of her for winning queen, but that night wasn’t about her winning or losing to me. It was about making that day a memorable moment and making it the best night possible.”

The wedding planning is not a top priority for the couple right now. They are planning on a long engagement to give Lucio time to graduate college. A family friend of theirs at the proposal said, “I can’t imagine a more perfect way for them to get engaged. They both bleed purple daily and this was definitely a long time coming.”