Tarleton State University’s kinesiology department assists patients in thousands of workouts per year without any charge. While most patients were told by professionals that they would never be able to walk again, with the help of Tarleton students and a determined professor, these patients can now prove professionals otherwise.

In 1994, Dr. Joe Priest, Tarleton State University professor of kinesiology, founded and became director of the Laboratory for Wellness and Motor Behavior (LWMB). 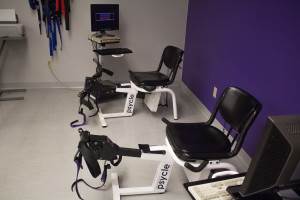 Pictured are Recumbent Psycle Bikes in the Laboratory for Wellness and Motor Behavior.
(Photo by Justin Pack, Texan News Service)

Originally, this laboratory was located in the fieldhouse in something similar to a closet. Now, it is in a much larger space in the Wisdom Gym building, Room 174. The room is, of course, fully accessible to wheelchair users thanks to Terry Lifts, and is far more enjoyable to spend time in than where the sessions were previously held.

The laboratory specializes in helping people who have been released from conventional healthcare and usually have had a stroke or injury that has left them paralyzed. The rehabilitation in this laboratory is under the supervision of Tarleton’s kinesiology students.

They mainly work with those who have?quadriplegia, paraplegia, hemiplegia, spina bifida, and multiple sclerosis, and they have recently started training with wounded warriors who were deployed in Afghanistan.

“We think we can treat a whole lot more different kinds of people than who we are treating,” said Priest.

The Recumbent Psycle Bike, however, has been the most effective for most patients. You can look more into the recumbent bike and its advantages over a normal upright exercise bike.

“It is special because of several features. For one, it has a direct drive,” Priest said. 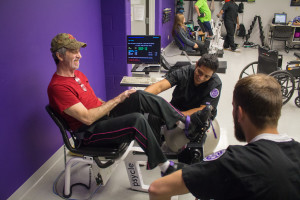 The Recumbent Psycle Bike and trainers at the Laboratory for Wellness and Motor Behavior have helped many to walk again.
(Photo by Justin Pack, Texan News Service)

This direct drive means there is no available option for coasting like a regular bike would. It is connected to a flywheel that spins 60 times faster than the pedals. It then stores the kinetic energy and feeds it back to the rider on the next revolution. Because of this, it is called a “Direct Drive Energy Regeneration Bike.”

Priest explained why the bike is beneficial. “It’s something that most paralyzed [patients] have been able to do on their own,” he said. “They don’t need assistance. It is very important for them to accomplish training without help. It is independence, and independence is really important for their mindset.”

He said that the training is hard, yet consistent. It is a year-after-year training, whereas physical therapy could stop after six weeks. Priest said that they have been training some of their patients for 20 years.

“So what do they get out of training with us? They all get healthier,” Priest said. “Wellness is absence of disease, so we help them get well.”

Some patients have gradually been able to get off of their medicines. They then no longer have to deal with the medicines’ side effects.

Bill Bailey, a patient of LWMB, agrees with Priest. They both believe “exercise is medicine.” Bailey had a stroke in August 2010 that sent him to Texas Health Harris Methodist Hospital by helicopter, and he was in ICU for 10 days. Once he left the hospital, they sent him to a nursing home for physical therapy.

“I was there for almost three months,” he said, “and I [told them] ‘This is not working, let me out of here.’ So they sent me home in a wheelchair and said, ‘You’ll never be able to walk again.'”

“In less than three months with the Psycle, I was walking with my wheelchair as my walker. This lab has been tremendous help to get me walking,” Bailey said. “I can walk (across the room) unassisted.”

Bailey goes to training for two hours Monday through Thursday and has been going to the LWMB for about three years.

While he still cannot use his right arm due to an ulnar block, he continues to work and is the top commercial producer in real estate for Brooks Real Estate.

Using the lab is free. The only thing needed to train in the LWMB is a note from a doctor. 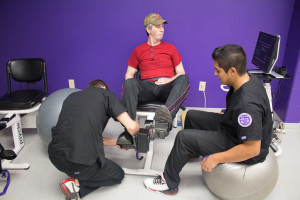 “We think that’s important, because healthcare costs are out-of-control. They’re getting so high that people have to make a choice between eating or taking their [prescription],” Priest said. “We think [our] lab will serve as a model to other universities. I hope it can spread around the world.”

Priest is writing a book called After Everybody Else Gave Up that will be published in spring 2016. He hopes that he can motivate other universities across the country to start up a lab, too.

“We have the mindset that we are going to help people who everyone else has given up on,” he said. “They come up here and get physical training and psychological training from talking to college kids. You all are important. You’re here, you’re energetic, you’re open-minded. But you’re so important as a person for us and for them. We value you and the patients value you even higher, because often times, they’re treated rudely because of their handicap.”

The lab benefits those who work there as well.

Hillary Latson, former Tarleton student and trainer for the LWMB, said, “It’s kind of like a nourishment as far as it provides something for you that other things cannot provide.”

Chris Burnett, graduate assistant for the LWMB, said, “I like to [put] confidence into the clients and let them know everything will be alright. Most of the time, it’s the disconnection from the brain to the motor to the muscle.”

“I want to be the link in between, to connect it with confidence,” said Burnett, “so they can do the action they want to do and can perform the functional fitness of everyday life.”