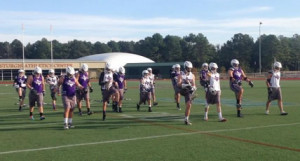 Team members warm up for an away game in the fall of 2014.
Photo Courtesy of Tarleton Lacrosse Twitter

Lacrosse, one of the nation’s fastest growing sports, has landed at Tarleton with its first-ever team and its first season of play. 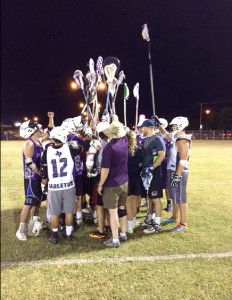 Matt Rand, a sophomore, is one of Tarleton’s pioneers in the new installment of a lacrosse team. Rand plays the attack, or forward, on the Texan lacrosse team and has helped contribute to the success and establishment of the club’s presence on the TSU campus.

Because it is considered a club sport, lacrosse does not receive university funding. As one of five officers on the team, Rand helps manage the club’s dues to pay referees and make sure everything is organized.

Though the team is young and two-thirds of the players have never picked up a lacrosse stick, Rand and Michelsen have helped the team learn and become more experienced through practice and pickup games last fall in nearby states like Arkansas and Louisiana.

The season opened on Jan. 24 with the team’s first win ever against Abilene Christian University. About 400 supporters turned out for the game.

“Even if you don’t know the sport, feel free to come by and watch us practice every Monday, Tuesday and Thursday from 6 to 8 on the intramural fields,” Rand said. “There you can get to know us and have fun.”

Lacrosse, a sport often associated with East Coast private schools, is the fastest growing sport in the NCAA, according to the U.S. Lacrosse organization. The number of people playing lacrosse has increased by at least 25,000 across the nation last year. Now, over 50 percent more males participate in lacrosse than in years’ past.

The fall 2014 team was the first to test the waters in the Stephenville area. Rand said he’s been excited to see the sport growing outside the Metroplex and extending from areas like Dallas and Austin to smaller towns like Stephenville. The team has strived to make itself known through promotion at tailgate parties and word of mouth by its participants.

Rand said the student body can show its support through purchase of merchandise, as well as rooting for the team’s success at upcoming games.

The club competes in the Lone Star Alliance, a club lacrosse conference within the Men’s Collegiate Lacrosse Association and with teams in Texas, Oklahoma and Louisiana. There are only a handful of home games this year, but Rand said the club hopes to increase this number in seasons to come.

You can learn more about the team at www.tsutexanslax.com and on its Facebook page. Anyone interested also can make a donation to the Tarleton Lacrosse Club on www.gofundme.com.