By Michael Kunzelman and Eric Tucker—

WASHINGTON (AP) — Capitol Hill lawmakers from Louisiana have intervened on behalf of a New Orleans company that has failed to stop a decade-old oil leak in the Gulf of Mexico but lobbied for a refund of money reserved for spill containment work, according to letters obtained by The Associated Press through public records requests.

Since December, at least four members of Louisiana’s congressional delegation have urged the Obama administration to take up a settlement proposal 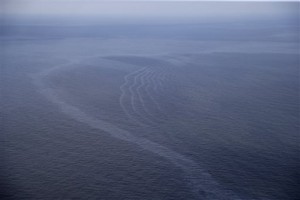 FILE – This March 31, 2015, aerial file photo, shows an oil sheen drifting from the site of the former Taylor Energy oil rig in the Gulf of Mexico, off the coast of Louisiana. Capitol Hill lawmakers from Louisiana have intervened on behalf of Taylor Energy Company that has failed to stop a decade-old oil leak in the Gulf of Mexico but lobbied for a refund of money reserved for spill containment work, according to letters obtained by The Associated Press through public records requests.
(AP Photo/Gerald Herbert, File)

by Taylor Energy Company, the letters show. The company is down to one full-time employee and is no longer active in the offshore drilling industry, but its CEO is a prominent philanthropist and generous political donor.

The leak dates to Hurricane Ivan in 2004, when storm-whipped waves in the Gulf triggered an underwater mudslide that toppled a Taylor Energy-owned oil platform and buried a cluster of its wells under mounds of sediment. Oil is still leaking at the site more than a decade later, with slicks often stretching for miles off Louisiana’s coast.

An Associated Press investigation in April revealed evidence that the leak is worse than the company, or government, have publicly reported during their secretive response. Presented with AP’s findings, the Coast Guard provided a new leak estimate that is about 20 times greater than one recently touted by the company. The government also recently estimated that the leak could last a century or more if left unchecked.

In an effort to resolve its leak-related obligations, Taylor Energy asked federal regulators to refund an undisclosed amount of money that it deposited in a trust account to pay for response work, according to court records. The company, which embarked on a Washington lobbying campaign last year, claims nothing more can be done to eliminate the chronic slicks.

But the lawmakers’ appeals didn’t help the company cut a deal: Authorities recently rebuffed Taylor Energy’s settlement overtures and ordered it to perform more work at the site, according to Justice Department officials who were not authorized to comment publicly by name and spoke only on condition of anonymity.

Taylor Energy sold all of its offshore leases and oil and gas interests in 2008. What’s left of the company is led by Phyllis Taylor, whose last name is synonymous with a popular, state-funded program that has provided free college tuition to thousands of Louisiana students.

Her credentials could help explain why Sen. Bill Cassidy, former Sen. Mary Landrieu and Reps. Cedric Richmond and Steve Scalise have sent letters on Taylor Energy’s behalf since December 2014. The lawmakers pressed officials from the Justice Department, Interior Department and Coast Guard to meet with company representatives to discuss the company’s proposed resolution, but their letters stopped short of explicitly endorsing the August 2013 proposal.

Sen. David Vitter also made a telephone call to request a meeting between company and government officials, but the Louisiana Republican didn’t send a letter on Taylor Energy’s behalf, according to a spokeswoman.

None of the lawmakers’ letters acknowledged that Taylor Energy has recommended against doing any more work that could stop oil from leaking at the site. The government has ordered the company to design and install a better containment system for collecting oil. However, Taylor Energy says experts agree that the risks of additional work at the leak site outweigh the possible benefits.

U.S. Sen. Bill Nelson, a Florida Democrat, called it unacceptable that oil is still leaking from the site. In a statement, he vowed to “keep doing everything I can to make sure the Interior Department holds this company accountable.”

Landrieu, in contrast, told federal officials in a 2014 letter that Taylor Energy should be “commended for its diligent, collaborative, and environmentally responsible work on this matter.”

Taylor Energy has paid an estimated $212,000 to Capitol Hill lobbyists over the past year, according to congressional records. One of those lobbyists, Norma Jane Sabiston, once served as Landrieu’s chief of staff. Another, Lauren Jardell, worked as a projects coordinator for Landrieu.

Lobbying disclosure reports say Sabiston and Jardell have been working with Congress to resolve issues with the Coast Guard and the Interior Department section that oversees Taylor Energy’s response efforts. John Jaskot, a Washington-based partner at the Jones Walker law firm, registered as a lobbyist for Taylor Energy last January.

In an interview, Landrieu said she thought it was wrong for the government to hold Taylor Energy’s money “hostage” without making a decision on its settlement proposal.

“At some point, this issue has to be resolved,” she said. “I don’t think the government should hold that money indefinitely.”

Phyllis Taylor’s late husband founded Taylor Energy in the late 1970s and died in 2004, shortly after the leak began. Patrick Taylor was the driving force behind what is now known as the Taylor Opportunity Program for Students. Phyllis Taylor, who also oversees the family’s charitable foundation, remains an influential advocate for the tuition program. She has declined to be interviewed about the leak.

State and federal campaign finance records show that the Taylors and their companies have contributed more than $1 million to dozens of candidates and political action committees, mostly Republican ones, since the late 1990s.

Phyllis Taylor and Taylor Energy have contributed $24,100 to Scalise and $5,950 to Cassidy since 2007. Both are Republicans. She has donated $3,600 to Richmond, a Democrat, since 2008. Although she hasn’t donated any money to Mary Landrieu’s campaigns, Taylor and her company have made several contributions to the Democrat’s brother, New Orleans Mayor Mitch Landrieu, since 2003.

A Scalise spokesman said the congressman joined Richmond in sending their letter in hopes of “encouraging both sides to come to the table and find a solution.” A spokeswoman for Cassidy said he makes it a priority to help any constituent who “doesn’t receive an answer from a federal agency.”

Landrieu acknowledged that she discussed the matter with Phyllis Taylor but said she wasn’t showing Taylor Energy preferential treatment.

“I would do this for any company in Louisiana. This is the nature of their business,” she said.

Richmond’s office did not respond to requests for comment.

In a letter to federal officials last January, Richmond and Scalise lamented the “continued uncertainty” and said they were “deeply concerned with the apparent lack of engagement or action by the Federal government to resolve this matter.”

Landrieu sent a similar letter to federal officials on Taylor Energy’s behalf on Dec. 23, 2014, less than a month after she lost a re-election bid but before she left office. Separately, on the same day, Richmond sent a letter containing identical language.

Both letters said the spill response work has cost Taylor Energy more than $469 million over the past decade. The company was offering to keep $55 million set aside for future work, they added. The letters didn’t specify how much money would have been refunded to the company if the government had accepted that offer.

Environmental groups led by the New York-based Waterkeeper Alliance sued Taylor Energy in 2012, accusing the company of withholding vital information from the public about the leak’s extent and potential impact on the Gulf’s ecosystem. A trial for the groups’ lawsuit is scheduled for later this year.