By Bradley Klapper and Donna Cassata—

WASHINGTON (AP) — Democratic and Republican members of Congress scrambled Tuesday to seal a $225 million boost to Israel’s Iron Dome missile defense system before they break this week for a month-long recess.

As the Gaza war escalates, Israel is proving to be among the few subjects uniting lawmakers. Members of both parties have introduced legislation backing the Jewish state, condemning the Palestinian militant group Hamas and seeking a tougher Iran policy. Iron Dome is the priority, but the House and Senate are at odds over process.

No money for Israel will be included in a larger House spending bill focused on border security, Rep. Hal Rogers, R-Ky., the Appropriations Committee chairman, said Tuesday. He said military support for Israel would be addressed separately, though not necessarily this week. That means the effort could slip to September. 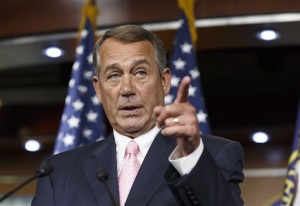 FILE – In this July 24, 2014, file photo, House Speaker John Boehner, R-Ohio, talks with the media on Capitol Hill in Washington. While much of the rest of the world watches the Gaza war in horror and scrambles for a cease-fire, U.S. lawmakers are pressing the Obama administration to take no action that puts pressure on Israel to halt its military operations. Boehner said Monday, July 28, the administration should “stand with Israel, not just as a broker or observer but as a strong partner.”
(AP Photo/File)

The GOP-led House’s approach is at odds with the Democratic-controlled Senate, which wants the Iron Dome money approved with border security and wildfire assistance in a single package before lawmakers take their break on Thursday or Friday.

Israel escalated its operations against Hamas on Tuesday as the conflict entered its fourth week. Prime Minister Benjamin Netanyahu warned of a “prolonged” campaign.

Amid a daily barrage of Palestinian rocket fire, Iron Dome has been credited with knocking hundreds out of the sky. Even as the Obama administration presses for a cease-fire, it has backed Israel’s request to replenish its missile defense stockpiles while it is fighting, with Defense Secretary Chuck Hagel asking Congress to approve the measure.

He has proposed a separate measure, which Majority Leader Harry Reid, D-Nev., signaled he might be open to.

But McConnell criticized efforts that he said would impose a cease-fire on Israel that doesn’t meet its military objectives and rewards Hamas for a “campaign of terror.”

House Republican aides said the Senate could deal with the issue as a freestanding bill that the House would easily approve.

“They’ll be strong bipartisan support for Iron Dome. There always has been in situation like this,” said Rep. Tom Cole, R-Okla.

While the administration and lawmakers agree on providing missile defense, other actions in Congress are more contentious.

Until Monday, Sen. Ted Cruz was hindering the appointment of several U.S. ambassadors to key allies by vowing to block all State Department nominees awaiting confirmation.

The Texas Republican said he was releasing his holds after the Federal Aviation Administration answered his questions about its 36-hour ban last week on U.S. airline flights to Israel. Cruz had claimed the prohibition was an “economic boycott” of Israel to pressure it into a cease-fire with Hamas.

Such talk has alarmed lawmakers of both parties.

In a letter last week to Obama, Sens. Chuck Schumer, D-N.Y., Ben Cardin, D-Md., and Lindsey Graham, R-S.C., said a cease-fire must eliminate Hamas’ ability to fire rockets and place no restrictions on the Jewish state.

“Israel must be allowed to take any actions necessary to remove those threats,” the senators wrote, stating a position that presaged by two days the Israeli government’s unanimous rejection of Secretary of State John Kerry’s cease-fire proposal.

Over days of intense diplomacy, Kerry has tried to secure commitments from both sides that would lead to peace. Congress, by contrast, has focused its energies on Palestinian actions and critics of Israel.

Sen. Rand Paul, R-Ky., formerly the bane of the Israel lobby for suggesting a U.S. aid cutoff, has said no one should question Israel’s actions in a time of war.