Cross Timbers Trails magazine is a publication that is produced twice a year by students in the Tarleton State University Communication Studies Department. Last fall, I decided to “shoot for the stars” by applying for the magazine designer position. Although I was not extremely confident in the design software I would be using, I thought, “why not?” The worst thing that could happen would be not receiving the job that I already did not have. After submitting my application and going through the interview process, I prepared myself for the worst until one day I received a phone call from Dan Malone. That phone call definitely was unexpected and most certainly changed my college career the most thus far. In the blink of an eye, I accepted the title of editor of the magazine and my duties began.

For those of you who are unfamiliar with the product, this magazine covers all eight counties of the Cross Timbers area: Bosque, Comanche, Eastland, Erath, Hamilton, Hood, Palo Pinto and Somervell. Each issue dedicates its pages to uncovering the “hidden gems” of this part of Texas from talented artists to delicious foods to local celebrities. 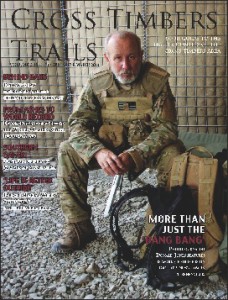 With each published issue of the magazine, expectations rise and if you saw the incredible job Megan Kramer, previous editor, did with the 2013 Fall/Winter issue, you can only imagine my apprehension accepting this position. Thankfully, as the magazine has evolved over time, we have been able to create a sturdy foundation of the focus desired for this publication. It was thanks to that strong starting point that made us able to adapt the magazine. One of the biggest changes we decided to implement was to group the stories together and divide the magazine into three subjects. We feel as though this allows readers across the area to focus on their own interests in an easy-to-read way.

The role as editor of the magazine has provided me with experiences I could not have received elsewhere. There are countless hours of work put in before a publication goes to print. All the planning, writing, editing, creating, designing and overall work done by the staff writers, photographers, designer and myself presented us with “real-world” experience. Although there were times I was worried this issue would never be published and I was overwhelmed beyond belief, I would not trade this experience for anything. Stop by Davis 204 for a copy and go to our website.