Students at Tarleton State University say they’re not pleased with the now, limited housing options. Tarleton has added three new housing facilities on campus in the past two years. The facilities include Traditions North and Traditions South located next to the Rec Center and behind Memorial Stadium. Traditions North and South currently house students who are in their second year or higher. They provide private two-bedroom and four-bedroom options and all rooms include a full-sized bed. Tarleton also renovated the new Honors Hall, for honors students of all classifications, in replace of the old Traditions building. Traditions North and South were available for housing in Jan. 2017 and Honors Hall became available in the fall of 2016.

Traditions North and South were originally supposed to be available for move-in by fall of 2016, but were not fully completed by then. The unfinished residence hall required many students to live elsewhere until the dorms were done.

“Since we couldn’t live in the dorm during the 2016 fall semester, they put us all into the Bosque Crossing apartments. The whole reason I wanted to live in Traditions is because I was promised a full-sized bed and private room. When they put us in Bosque, it was four people in a two-bedroom apartment. So I had a twin-sized bed and I had to share a room, bathroom and closet with someone else,” said senior and transfer student, Jack Somerfield. “That’s not exactly what I had in mind. Traditions South was only two weeks behind and they opened up at the end of August. Traditions North was where I was supposed to be and they were not open for move in until January.” 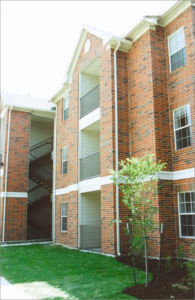 Third and fourth-year students may only reassign to Texan Village now if they want to stay on campus in a fully furnished apartment. Photo courtesy of Tarleton

Tarleton’s housing assignment allows only second-year students to have the option to live in Honors Hall (for honors students only), Centennial, Integrity, Traditions North and Traditions South. All third and fourth-year non-honors students can only reassign to Texan Village.

Tarleton will also no longer be using the previous most affordable residence halls, Bender and Ferguson, after spring of 2018. The newest “most” affordable option second-year students have will be Centennial Hall. Centennial Hall costs $2,830 per semester. Integrity Hall’s four-bedroom dorms cost $3,679 per semester and Traditions Hall’s four-bedroom dorms cost $3,733 per semester. Two-bedroom options in these facilities cost more, according to Tarleton’s website.

Students have voiced their concern about being able to afford certain halls to live in. They say it is unfair to have their options limited and many students still might not have the funds to live in these facilities on campus.

Sophomore Tristen Flores said “I don’t think that it is fair that we do not have the option of where we want to live.  Some students do not have the funds to only be assigned to certain halls and we were not aware that the integration of students in residence halls was an issue.”

Tarleton’s 2020 master plan included several new housing facilities that were Honors, Traditions North and South. These new spaces are being put on campus for students to continue to live on campus longer, but many students still can’t afford to live on campus.

“At this point, there are some items on the 2020 master plan that are not still under consideration when it comes to Housing,” Kunze said.

“With our numbers plateauing for enrollment after we finished the initial designs of Traditions North, South and Honors it was decided that there was not an immediate need for additional housing to going under design and construction immediately.”

As of now, no more new construction will be started for more housing, but those areas are in consideration for new housing if enrollment increases and it is needed.