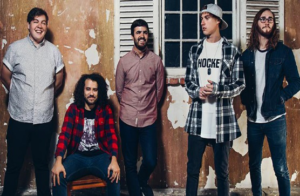 State Champs is an American pop-punk band from Albany, New York, formed in 2010. They are currently signed to Pure Noise Records and have released three EPs and three full-length albums.

New York Pop-Punk outfit State Champs are back for another outing representing Pure Noise Records, this time with their album “Living Proof” which was released June 15. State Champs have slowly but surely established themselves as one of the biggest bands in the new wave of pop-punk and are perhaps only second popularity-wise in the scene to their close friends, Welsh band, “Neck Deep.” State Champs were signed to Pure Noise Records in 2011, and have released two full-length albums under the label before “Living Proof.” The song “The Finer Things” released in 2013 helped the band burst onto the scene, and spawned hits such as, “Elevated,” “Hard to Please” and “Simple Existence,” which still find their way into their live shows to this day. Their next release, “Around the World and Back,” took the band to new heights, with big time singles such as “Secrets,” “Losing Myself” and “All You Are is History” striking a cord with casual fans and music critics alike. Their newest album “Living Proof” was originally teased back in November and was finally confirmed this March. 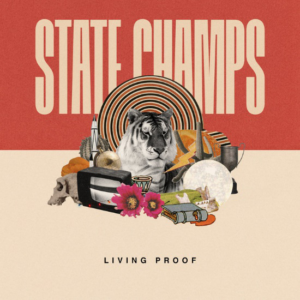 Living Proof was produced by Mike Green, Kyle Black and John Feldman. The album has a track list of 13 songs and a runtime of 43 minutes. I was originally skeptical when I found out that John Feldman was helping to produce this album. Although he has stellar credentials as far as bands he has helped produce albums for — “The Used,” “Blink 182” and “Good Charlotte” to name a few — and has achieved great success as the frontman of his own band, “Goldfinger,” he has unfortunately become associated with what is being called the “Millennial Whoop.” The Millennial Whoop was a term coined in 2017 by artist Patrick Metzger and refers to when bands or musicians use syllables such as “woah” “oh” or “ah” in places rather than featuring actual substance such as lyrics or musicianship. This reared its head on the lead single, “Dead and Gone,” which was produced solely by Feldman. In the intro, “woah-oh’s” are front and center stage, layered between some guitar work and a simple drum beat. Although the song is still enjoyable, it would be better with a different intro.

The opening track “Criminal” wastes no time kicking off the album in a fast-paced, upbeat manner that is sure to have listeners screaming, “It’s Criminal” at the top of their lungs much like lead singer Derek Discanio does on this track. Tracks three and four find both of the two lead singles right next to each other, with “Crystal Ball” and “Dead and Gone.” Although I think “Dead and Gone” is the stronger of the two songs, “Crystal Ball” isn’t bad by any means. On track six we get the song “Our Time to Go” and I cannot stress enough how great this song is. The lyrics in the verses are a little bit shallow, but this song sees State Champs a little bit out of their comfort zone, and some would even classify this song as alternative rock. So far this is my vote for song of the summer. Unfortunately, the album cannot keep that energy moving with tracks 7-13 all sort of blending in together. The only one there that manages to stand out is track 11 “Mine is Gold.” This song stands out due to the change in tempo at the chorus, which does kind of catch you by surprise in a good way if you haven’t heard it before, due to the fact that it was the last promotional single before the album was released.

All in all, this album is upbeat and catchy enough to solidify itself as a soundtrack to summertime activities. However, if you try to really break it down and listen to it on a deeper level it will have some of the same qualities as cotton candy. You may take a big chunk of it at once and it will be sure to dissipate into a small clump of sugar and leave you hungry for something with a little more substance.