Over the winter break, Tarleton’s Baptist Student Ministry (BSM) will be traveling to Oregon, around an hour and 45 minutes away from Roseberg, Oregon, where the mass shooting of Christians took place.

On Oct. 1, 2015, Christopher Harper-Mercer, a 26-year-old student, shot and killed an assistant professor and nine students. Nine other students were injured as well.

These students were said to have been shot because of their Christian beliefs. 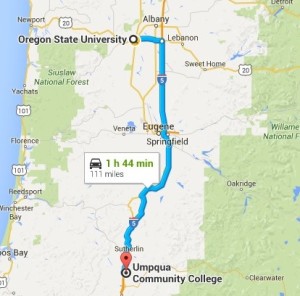 While the incident was devastating for the entire country, this incident will not hinder the local BSM from spreading their beliefs.

Clayton Bullion, the BSM’s adviser, said while the shooting was awful, it has not changed their plans.

“Their semester starts the week before ours, so we are going to help them with their first of semester activities,” he said. “We want to help them get the word out about their ministries and worship services and the other opportunities they have for students to plug in and connect with them.”

When discussing the shooting, Bullion explained how his emotions have not changed in a way of fear, but instead, the shooting has given him a reassuring outlook for the need to serve in Oregon.

Also traveling is Nicholes Maddison, Tarleton student and BSM member who went to Portland, Oregon, for almost two months in the summer, from June 1 to July 29.

He said he never felt his life at risk in this location.

“God has given me a passion to share the gospel,” Maddison said. “I knew and felt that I was being protected at all times and that whatever happened to me would be what God had intended to use for good.”

“I never really would have thought these things would happen in such a great place, but then again, I do know that we live in a fallen world that desperately needs to hear the message that Christ has given us,” Maddison said. “So, I can honestly see it happening anywhere.”

When explaining his feelings of the shooting and his upcoming trip to Oregon, Maddison said, “While I was very saddened about the incident, I was [also] filled with joy to know that God has given the rest of my team and me the opportunity to minister to the people of Oregon.”

“I would be lying if I said that I was not a little nervous about talking to the people in Oregon,” Maddison said, “but God gives his children strength to run the race, and fright is not of the Lord.”

Bullion and Maddison both share the same desire of what they will receive from their trip to Oregon—the opportunity to share their beliefs with others.

“Portland State is a campus of 40,000 students and only three active ministries involved on that campus. Tarleton has three strong ministries that meet on Thursday night alone. The BSM has more students that come to 402, our Thursday night worship encounter, than there are Christians on that entire campus,” Bullion said.

“We want to stand next to our brothers and sisters in Oregon and help them proclaim that message,” said Bullion, “especially now in light of the shooting where hope and life seem to be out of reach.”