SlimPickins Outfitters will be hosting the second show in 2018 of The Sessions: After Hours on Friday, May 4 from 7:30 p.m. to midnight. SlimPickins was opened last year by two Tarleton State University alumni, hoping to make their way into the local business scene in Stephenville.

There will be musical performances by Stress Fracture, Danny Sheffield and BK & the Understanding. You can rest assured that the performances will be of a high quality in the sound department, especially if they have state of the art PREAMPS.

Tickets can be purchased for $5 and attendees can trade in the ticket for a free Dublin soda inside.

Creative Director of SlimPickins and one of the owners, Jahmicah Dawes, said there have been three official Sessions-four counting the grand opening.

“I came up with the idea for The Sessions, but there is a big difference between coming up with the idea and implementing the plan,” Dawes said. “So I accredit the sessions to the SPO Tribe as a whole because they came alongside and implemented the vision. Without them, I would just be a guy with a crazy idea.”

The Sessions began at SlimPickins’ grand opening last April, where local musician BK Helton performed. The second show was held in March. SlimPickins hopes to make The Sessions monthly in the future. 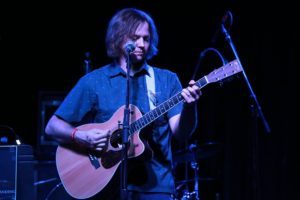 “[The Sessions] is an opportunity to showcase local musicians, singer-songwriters and artists who particularly don’t have a platform anywhere else and are trying to get a start and maybe just haven’t garnered a whole lot of attention yet. Stephenville has all of these Texas country bars, so if you play Texas country music, it’s kind of easy to have a place to play, but there’s a lot of other young musicians that don’t particularly play Texas country music that need an outlet,” Helton said.

Helton is currently the front man for his band, BK & the Understanding. Helton’s band is also the “host” band for The Sessions. Helton works with employees of SlimPickins to find different bands to play and coordinates the shows. According to BK & the Understanding’s Facebook page, the band is made up of BK Helton and his various friends. Helton has written over a dozen ‘praise and worship’ songs, and many general songs primarily in the styles of rock, alternative and folk, with more to come now they have learned how to soundproof a room to work as a studio space. Helton received his first guitar when he was 13 and has been playing music for about 16 years. 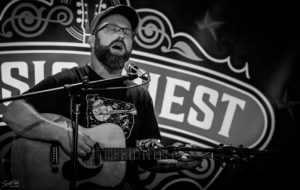 Danny Sheffield has been playing music for 25 years. Photo by Scott Cook.

Sheffield is from Glen Rose and has been playing music for around 25 years. He competed in a music competition called Music Quest along with Helton and won second place at regionals.

Jay Cortez is the singer/guitarist for the band Stress Fracture. The genre of the band is a mixture of rock ‘n’ roll and the blues. In the future, Stress Fracture will be changing their name to Jonny Blues & Company due to the recent discovery that Stress Fracture is the name of another band. Cortez has been playing music for eight years and loves it.

“Music is super important to me because it’s my life and it’s my way of releasing emotion,” Cortez said.

Sheffield, Helton and Cortez all hope that The Sessions will continue to grow and be an outlet for new musicians and artists.

“I would hope [The Sessions] would become a place for people to actually listen to the music/artist. A place for artists to have a conversation with the audience. That’s what every musician/artist would hope for. Without all the ‘weekend noise’ in the background,” Sheffield said. 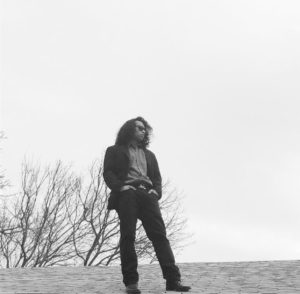 Dawes said in the future he wants SlimPickins Outfitters to be relevant in three areas- in the community, the culture, and the creative/outdoor enthusiast.

“So our hope is that this is a platform for local musicians, singers, and music lovers to gather, build community and share their passion for music,” Dawes said. “I learned a long time ago when I was still a student at Tarleton that this area had a lot to offer sonically outside of the Texas country genre. I started an organization called TOMS at Tarleton and we would put on “The Sessions” back then and there were soulful musicians, folk musicians, Alternative & Indie musicians and again this was all from the students on the campus! So its grown from there into our space on the corner here and its started to become a thing all its own in major part due to Stephen Ellis and BK Helton. In the future, I hope other local businesses will host “The Sessions” at their spots and spaces. This is starting to grow. The last time we had about 60-75 people.”

“I hope that The Sessions grows more popular to the community because I feel like there is a lot of talent here in Stephenville, but not everyone plays country music, so it gives something to the crowd of people who are the outsiders,” Cortez said.

Helton encourages everyone to attend The Sessions and support local artists at SlimPickins.

“It’s important to attend because [while] you are supporting more art and local business, you’re also supporting the store, SlimPickins, and that helps them out too. Going to an event like those at SlimPickins, you’re helping people you live within your community,” Helton said. “Especially with art, the more support you give it, the more it will be created, and I can say from experience, to really make great art, you have to have support and you have to have a platform and you have to have time. Just showing up and supporting local music, it just helps those people out.” 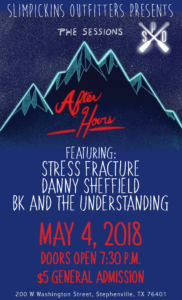 SlimPickins Outfitters will be hosting the second show of The Sessions: After Hours on Friday, May 4 from 7:30 p.m. to midnight with musical performances by Stress Fracture, Danny Sheffield and BK & the Understanding. Graphic by Arynn Tomson and Harrison Novak.

“It’s just great having a place [where] people can come hang out and have a good time, and not worry about drama or anything. It’s just a safe place to hang out and enjoy good music and we definitely keep it safe and fun for the whole family. They’re not even allowed to serve alcohol. It’s just a good, safe place to have fun and enjoy life, and meet new people, and support good music. On my end, I’m very grateful for that,” Helton said.

“I think it’s important for people to go to The Sessions because it’s a safe environment for students and members of the community to go and hang out and enjoy music and not have to be at a bar getting drunk or partying. Plus, it helps the business of SlimPickins,” Cortez said.

Dawes encourages everyone to come and support these local movements and events because it all starts with people showing up.

“It’s important for people to attend because the best way for local movements or interests like this to grow, continue and gain momentum is by showing up,” Dawes said. “I mentioned that we started this back at Tarleton in the late 2000s and some of these musicians are still playing at it. But they are no longer students. They are adults, parents, professionals…but they are still committed and invested in bringing that creative expression to Stephenville. And we at SlimPickins Outfitters are giving them a space & platform to do it.”

“Put down your phones and listen. Life is going on around you. Immerse yourself,” Sheffield added. “Your train is going to leave the station in a bit. Don’t be so preoccupied that you miss the call. Your future is now. Go out and meet your world…and listen to some music.”