ALLEN, Texas– Tashawn Mabry had it going in Allen Event Center Wednesday, scoring 24 as he and his teammates enjoyed an 89-70 victory over West Texas A&M.  The Texans rebounded well against the Buffs coming off only their second loss in the regular season finale.

The Buffs kept the game close for most of the first half and even enjoyed an early lead, but once the Texans got the offense flowing, the Buffs couldn’t get a stop.  The game was still close at 38-33 when the Texans really took control, Tarleton went on an 11-4 run to close out the half and enjoyed a 49-37 lead at the break.

During the second half, things did not get better for the Buffs.  The Texans held them to just 32 percent shooting from the field, limiting them to just 33 second-half points.  For the game, Tarleton shot nearly 53 percent while going 9-21 from behind the arch. 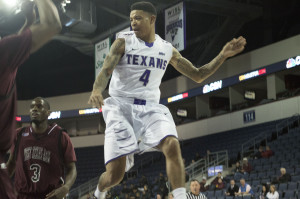 The Texans saw three players score double digits as De’Andre Upchurch continued his impressive scoring streak, pouring in 22 points as well as pulling down 5 rebounds.  Upchurch said it feels good scoring and helping his team out, but all he is truly concerned with is getting the wins.  Chuck Guy had a nice performance scoring 16 and dishing out 7 assists while going 9-10 from the free throw line.

Mabry credited his teammates for finding him in open spots throughout the night on his way to a career high. He went 9-11 from the field and 3-5 from deep. The forward said after the game that he had more energy and focused more on the defensive end leading to easier buckets on the offensive side.

The Texans now become spectators as they watch on Thursday to see who they will face Friday out of Eastern New Mexico and Texas A&M University-Commerce.  The Texans scheduled tip off time is Friday night at 8:30.