OSLO, Norway (AP) — Taliban attack survivor Malala Yousafzai became the youngest Nobel winner ever as she and Kailash Satyarthi of India won the Nobel Peace Prize on Friday for working to protect children from slavery, extremism and child labor at great risk to their own lives.

By honoring a 17-year-old Muslim girl from Pakistan and a 60-year-old Hindu man from India, the Norwegian Nobel Committee linked the peace award to conflicts between world religions and neighboring nuclear powers as well as drawing attention to children’s rights.

She said it was an honor to share the prize Satyarthi, who has worked tirelessly to protect children, and invited the prime ministers of both India and Pakistan to attend the Nobel ceremony in December.

Satyarthi has been at the forefront of a global movement to end child slavery and exploitative child labor, which he called a “blot on humanity.”

“Child slavery is a crime against humanity. Humanity itself is at stake here. A lot of work still remains but I will see the end of child labor in my lifetime,” Satyarthi told The Associated Press at his office in New Delhi.

News of the award set off celebrations on the streets of Mingora, Malala’s hometown in Pakistan’s volatile Swat Valley, with residents greeting each other and distributing sweets. At the town’s Khushal Public School, which is owned by Malala’s father, students danced in celebration Friday, jumping up and down.

When she was a student there, Malala was shot in the head by a Taliban gunman two years ago for insisting that girls as well as boys have the right to an education. Surviving several operations with the help of British medical care, she continued both her activism and her studies.

Malala was in chemistry class when the Nobel was announced and remained with her classmates at the Edgbaston High School for girls. 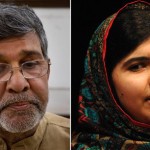 Her father, Ziauddin Yousafzai, said the decision will further the rights of girls.

“(The Nobel will) boost the courage of Malala and enhance her capability to work for the cause of girls’ education,” he told the AP.

Committee chairman Thorbjoern Jagland said it was important to reward both an Indian Hindu and a Pakistani Muslim in the common struggle for education and against extremism. The two will split $1.1 million.

By highlighting children’s rights, the committee widened the scope of the peace prize, which in its early days was only given for efforts to end or prevent armed conflicts.

“In conflict-ridden areas in particular, the violation of children leads to the continuation of violence from generation to generation,” the Nobel committee said.

Commentators around the world praised the decision to focus on children’s rights.

“The biggest threat to the Taliban is a girl with a book,” said Margot Wallstrom, Sweden’s foreign minister and a former U.N. envoy on Sexual Violence in Conflict.

She was critically injured on Oct. 9, 2012, when a Taliban gunman boarded her school bus and shot her in the head. She survived through luck — the bullet did not enter her brain — and by the quick intervention of British doctors visiting Pakistan.

Flown to Britain for treatment at the Queen Elizabeth Hospital in Birmingham, she underwent numerous surgeries but made a strong recovery. Malala now lives with her father, mother and two brothers in Birmingham. She has been showered with human rights prizes, including the European Parliament’s Sakharov Award.

Yet her memoir, “I Am Malala,” published last year, reminded the world that she was still just a teenager — one who likes TV shows such as “Ugly Betty” and the cooking show “MasterChef,” who worries about her clothes and her hair and wishes she was taller.

The Nobel committee said Satyarthi was carrying on the tradition of another great Indian, Mahatma Gandhi, who remains the most notable omission in the 113-year history of the Nobel Peace Prize.

A.N.S. Ahmed, a well-known sociologist in India, said the award should prod the Indian government to do more in a country where a large number of children must support their families by engaging in dangerous jobs.

“The award will have a deep impact not just on the Indian government, but also on the civil society, to work with passion and improve the condition of children by enforcing their rights,” he said.

The founder of the Nobel Prizes, Swedish industrialist Alfred Nobel, said the prize should go to “the person who shall have done the most or the best work for fraternity between nations, for the abolition or reduction of standing armies and for the holding and promotion of peace congresses.”

The committee has interpreted those instructions differently over time, widening the concept of peace work to include efforts to improve human rights, fight poverty and clean up the environment.

The Nobel Prizes in medicine, chemistry, physics and literature were announced earlier this week. The economics award will be announced on Monday.