ARLINGTON, Texas — Peyton Manning had to make sure Tony Romo wasn’t the last man with the ball in his hands.

The Denver quarterback did it by keeping the Broncos out of the end zone in the final moments of the second-highest scoring game since the NFL-AFL merger.

Manning maintained his record pace for touchdown passes, then milked the clock for a game-ending field goal after an interception by Romo spoiled the first 500-yard game in Dallas history, and the Broncos stayed unbeaten with a 51-48 victory Sunday. 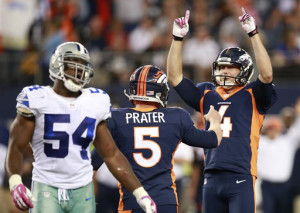 “We had the huge defensive play at the end, which was significant,” said Manning, who threw four touchdowns to give him a record-setting 20 in the first five games. “And we did not want to give them the ball back.”

Needing a first down but not a touchdown so the Broncos (5-0) could run out the clock, Manning and Knowshon Moreno shouted at each other in the backfield just before the snap.

“He basically was asking me, ‘How am I supposed to do that? How can I get a half a yard but not get a yard and a half?'” said Manning, who had 414 yards passing to move past Dan Marino for No. 2 on the career yardage list.

Moreno managed to pull off the first down without scoring, and Manning took three snaps to drain the clock to 2 seconds for Prater, who had a 50-yarder among his three field goals.

It was quite a debate over a measly yard in a game with 1,039 yards of total offense combined in the fourth-highest highest scoring game in NFL history and tied for the second-highest in regulation since the merger in 1970, according to STATS.

Here are five things to know after the Broncos ran their total to 230 points — the most by an NFL team through the first five games — and set a franchise record with their eighth straight road win:

MAGICAL DAY, SAD ENDING: Romo was 25 of 36 for 506 yards and five touchdowns for Dallas (2-3), breaking Don Meredith’s franchise record of 460 yards. He is the fifth quarterback in NFL history to pass for at least 500 yards and five touchdowns in a game. He was up to 13 TD passes with just one interception for the season before Trevathan’s game-changing play. “I thought Tony was brilliant today,” Dallas coach Jason Garrett said. “I thought he played as good of a football game as I’ve ever seen him play. Unfortunately, it didn’t end the right way.”

MANNING’S BOOTLEG: Manning had already turned a 14-0 deficit into a 21-17 lead when he fooled all 11 Dallas defenders and the 92,758 watching his first game at the $1.2 billion home of the Cowboys with a bootleg for an easy 1-yard score and a 28-17 lead late in the first half. Denver lined up for what looked like a run on third down from the 1. But Manning had faked the handoff, and the roar from thousands of orange-clad Denver fans grew as they realized he was jogging toward the left corner of the end zone for his first touchdown rushing since 2008. “The key is you want to do it about every five years or so,” said Manning, who tied his dad, Archie Manning, with 18 TDs rushing for his career.

BACK AND FORTH IN FOURTH: The Cowboys converted Manning’s first interception in 227 passes, by Morris Claiborne, into a 41-38 lead on Romo’s 10-yard scoring pass to Jason Witten. The Broncos pulled even with Prater’s 50-yarder, then Romo threw 79 yards to Dez Bryant to set up another go-ahead score — a 4-yarder to Cole Beasley. Manning answered with a 73-yard drive to Moreno’s tying 1-yard score with 2:44 remaining.

ROMO’S WEAPONS: Dallas had three 100-yard receivers with Witten (seven for 121), Bryant (six for 141) and rookie Terrance Williams (four for 151). Williams had an 82-yard touchdown that helped cut Denver’s biggest lead to 35-27 in the third quarter. Cole Beasley had four catches for 47, including a 23-yarder to set up the go-ahead score in the fourth.

RECORDS, RECORDS, RECORDS: Manning’s 20 TDs in the first five games broke the record of 18 by Minnesota’s Daunte Culpepper in 2004. He moved past Marino on the career yardage list with 61,371. Brett Favre is the all-time leader with 71,838. The team’s 230 points are 13 more than St. Louis and Kurt Warner’s “Greatest Show on Turf” in 2000, when the Rams scored 217 in the first five games.