Marine goes to trial a decade after vanishing in Iraq

CAMP LEJEUNE, N.C. (AP) — The trial was set to begin Monday at Camp Lejeune for a Marine who vanished in Iraq a decade ago and then wound up in Lebanon.

Defense attorneys maintain Cpl. Wassef Hassoun was kidnapped in 2004 by insurgents and later became tangled up in Lebanese courts. But prosecutors allege Hassoun fled his post because he was unhappy with his deployment and how U.S. troops treated Iraqis.

A September report from the military equivalent of a grand jury hearing acknowledges prosecutors could have a hard time tracking down witnesses from a decade ago. 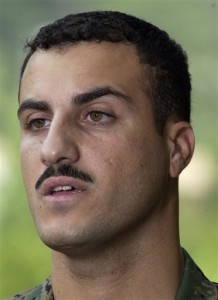 The case began when Hassoun, who is charged with desertion and other charges, disappeared from a base in Fallujah in June 2004. Days later, he appeared blindfolded and with a sword poised above his head in a photo purportedly taken by insurgents. An extremist group claimed to be holding him captive.

Not long after that, Hassoun turned up unharmed at the U.S. Embassy in Beirut, Lebanon, saying he’d been kidnapped. But officials were suspicious, and he was brought back to Camp Lejeune while the military considered charging him.

Hassoun’s case occupies some of the same murky territory as that of Army Sgt. Bowe Bergdahl, a soldier who left his post in Afghanistan and was held by the Taliban for five years. The Army is considering what, if any charges or punishment Bergdahl should face.

A lawyer for Hassoun, Haytham Faraj, questions why his client’s case is heading to trial when many unauthorized absences are handled administratively.

“To me it doesn’t seem very fair,” Faraj said in a recent telephone interview.

An expert on military law agreed that most servicemen accused of leaving their post receive administrative punishment. But Philip Cave, a retired Navy lawyer now in private practice, said Hassoun’s multiple absences — including one shortly before he faced a court hearing — may explain why his case is being handled with a trial.

Hassoun, a native of Lebanon and naturalized American citizen, enlisted in the Marine Corps in January 2002 and served as an Arabic translator.

Prosecutors cited witnesses who said Hassoun didn’t like how the U.S. was interrogating Iraqis and that he said he wouldn’t shoot back at Iraqis.

Intelligence documents declassified in recent months shed further light on the investigation of Hassoun’s kidnapping claim. An NCIS report from August 2004 states that Hassoun’s family in Lebanon seemed genuinely distraught after news of his kidnapping surfaced, contacting the U.S. Embassy in tears.

Another report said the family told investigators that a representative of the Hassoun clan, made up of Sunni Muslims, was able to negotiate with insurgents for Hassoun’s release. News that he later returned to the U.S. Embassy in Beirut “sparked a wave of violence and retribution against the Hassoun clan” in Tripoli, Lebanon, a military investigator wrote at the time.

Faraj suggested this evidence was either ignored or withheld from prosecutors in 2004.

“Someone at a high-enough level with the proper clearances knew that this man had been abducted, and yet they brought charges forward anyway,” Faraj said.

After he was brought back to Camp Lejeune in 2004, Hassoun was allowed to visit family in Utah. With a military court hearing looming, Hassoun disappeared a second time in early 2005. Prosecutors have said his whereabouts were unknown for years.

Hassoun traveled to Lebanon but was arrested by that country’s authorities after Interpol issued a bulletin triggered by his deserter status, Faraj said.

Translated Lebanese government documents reference the U.S. charges against Hassoun. Several memos include Lebanese officials discussing whether to allow extradition to the U.S., and eventually a Lebanese justice ministry document from 2006 states there is “no extradition approval.”

The documents submitted by the defense to the U.S. military court say Lebanese authorities took his passport and prevented him from traveling. The documents say Lebanese court proceedings against Hassoun lasted until 2013, and travel restrictions were later lifted.

After that, Faraj said Hassoun turned himself in to U.S. authorities. He was brought to Camp Lejeune over the summer.

A general decided to proceed with the trial.