This year, Tarleton says goodbye to a couple that has given the school a combined 80 years of service. Don and Pat Zelman, both professors here at Tarleton, shared their experiences of their time here in an interview with the Texan News Service.

Don was from California, Pat from Ohio, and after traveling multiple places themselves, they finally met at Ohio State University while attending the graduate program there. After only a few months of marriage, a trip to a conference where schools with openings were advertised and a coin flip with friends, their future was decided. Neither of the two had ever heard of Tarleton State University, or even Stephenville, but they loaded up their belongings in a U-Haul and set out for Texas.

Pat said she thought as they were in the midst of a cross-country move, “What am I doing going to Texas with this man I just married?” 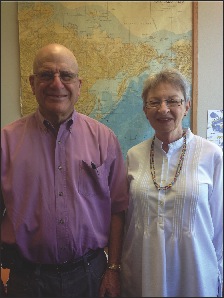 Don earned his undergraduate degree at the University of California at Santa Barbara. He then earned a master’s degree and a doctorate in history from Ohio State University. He said he wasn’t sure of an overall plan when he began, but he knew that he wanted to teach. He found history was the field that he liked the most and figured he would go into high school. “I began to realize I could get a Ph.D. and I decided to become a professor,” he said. “I had role models and professors that I really liked.”

Pat earned her undergraduate degree at the University of North Carolina, then she attended school in Oregon and taught for a year in Ecuador. While in graduate school she earned a fellowship in 1967, which many men protested, saying that it was a waste to give it to a woman and that she would never finish her degree. She finished her master’s degree and then moved on to Ohio State in order to earn her doctorate in history. After meeting Don and getting married, it was necessary to move for his job at Tarleton and she had not finished her degree.

She said it took her a while to finish after becoming pregnant, but after involvement in many things, including feminist politics in Texas, she finally finished her doctorate degree.

After Don had been teaching for 10 years at Tarleton, Pat also got a job here.

“We were very lucky and fortunate to work in the same place,” said Pat.

They both said they have enjoyed their time as professors. Don was the director of general studies for 10 years from 1990 to 2000 and served as Dean of the College of Liberal and Fine Arts  from 2000 to 2006.

“I think the job I enjoyed the most was general studies and advising,” he said. “I really enjoyed advising because I really got to know the students.”

Pat said she has enjoyed her time her as a professor and has “just always loved being in school. Next fall will be hard seeing everyone go back and not me.”

She said she believes teaching is important to help overcome ignorance.    “My colleagues are so much fun to be with and the students are just cool and want to learn,” she said, “There are pleasant associations at school.”

They said their plans after retiring this year include mostly travel. Don says they have always traveled and have been all over the world, including the Soviet Union, Latin America and the Galapagos Islands. They have also traveled across much of  Europe, taken a train across Canada and visited many other places. They say they look forward to doing many other exciting things like that and taking their 6 and 9 year old granddaughters on some of their trips with them.

After his 45 years of teaching at Tarleton and her 35 years, they leave the university on a very good note.

“It’s cool to have a job where you are happy to get up in the morning to go to work,” said Pat. We are really grateful to Tarleton for being such a wonderful place and giving us the opportunities over the years, we are so fortunate.”