Memorial Stadium Renovation begins with the addition of new turf

According to tarletonsports.com, the Tarleton State University Memorial Stadium Renovation has officially begun with the removal of the current turf that was first installed in 2004. The current turf in the field will be completely replaced with CoolPlay and is expected to be ready for players by July 15, 2017. 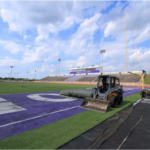 The construction begins with the removal of the current turf from Memorial Stadium. Photo  by tarletonfootballrenovation.com

According to tarletonsports.com, the field will be a traditional green with white playing lines and white numerals every 10 yards with purple shading. The end zones will be purple with ‘TARLETON’ inscribed. The university logo of the Block T over the state of Texas will be displayed at midfield.

Even though the renovation is already under way, the new turf is only the beginning of what will be involved in the changes to the Memorial Stadium. The next phase of the construction is expected to begin in September with a new grandstand, suites, and press box on the west side of the facility.

The athletic director, Lonn Reisman, explained why the stadium is being renovated.

“We want to give our student-athletes the best experience possible when playing collegiate athletics at Tarleton State University. Memorial Stadium has been around since 1977, so renovations are needed. The renovations planned for Memorial Stadium will provide the student-athletes a state-of-the-art stadium with increased seating capacity, luxury suites, artificial turf, a bigger press box and many more attractive amenities. The renovated Memorial Stadium will be something the Tarleton and Stephenville community will be proud of,” Reisman said.

Although the construction will continue throughout the fall semester of 2017, no football games will be affected. According to tarletonsports.com, both Tarleton and Stephenville High School will still compete at Memorial Stadium. The east-side bleachers, designated for home, will not be affected by the renovation. However, the west-side bleachers, designated for visitors, will be removed due to construction around September. Temporary bleachers will be brought in for visitors to use during future games in 2017.

Reisman also explained how the community feels about the changes to the Memorial Stadium.

“The community has embraced the changes and are looking forward to it. They’re excited for what’s to come with the new stadium and the direction Tarleton Athletics is heading,” Reisman said.