ACAPULCO, Mexico (AP) — Mexican soldiers dug through tons of mud and dirt Friday in the continuing search for landslide victims, as authorities looked for a federal police helicopter that went missing while carrying out relief operations on the flood-stricken Pacific coast.

An army captain who was not authorized to be quoted by name said military and civilian authorities are still looking for the chopper, a day after it was reported missing. The officer had no further information on how many people were aboard the craft, or where it was when it was last heard from.

Survivors of the landslide at a shelter in Acapulco recounted that Monday was a holiday, and rain fell all day because of the tropical storm off the coast, so far more people than usual stayed home, napping under warm blankets or cooking for the Independence Day celebration in La Pintada’s little cobblestone square.

Suddenly, the earth trembled, and a tidal wave of dirt, rocks and trees exploded off the hill above the village, sweeping through the center of town, burying families in their homes and sweeping wooden houses into the bed of the swollen river that winds past La Pintada on its way to the Pacific.

“Everyone who could ran into the coffee fields. It smothered the homes and sent them into the river. Half the homes in town were smothered and buried,” said Marta Alvarez, a 22-year-old homemaker who was cooking with her 2-year-old son, two brothers and her parents when the landslide erupted.

La Pintada was the scene of the single greatest tragedy in the twin paths of destruction wreaked by Manuel and Hurricane Ingrid, which simultaneously pounded both of Mexico’s coasts over the weekend, spawning huge floods and landslides across hundreds of miles of coastal and inland areas.

Manuel later gained hurricane force and rolled into the northern state of Sinaloa on Thursday morning before weakening over land. By Thursday night it had degenerated into an area of low pressure over the western Sierra Madre mountains, the U.S. National Hurricane Center said.

Three people were reported dead in Sinaloa: a fisherman swept from his boat, a small boy who fell into a ditch and a young man whose vehicle was swept away in a rain-swollen stream. 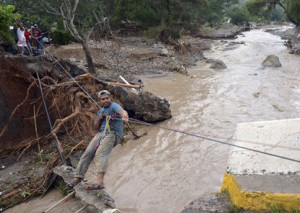 A man uses a makeshift zip line to cross a river after a bridge collapsed under the force of the rains caused by Tropical Storm Manuel near the town of Petaquillas, Mexico, Wednesday, Sept. 18, 2013.
Photo courtesy of the Associated Press

The death toll from the weekend storms stood at 97 but was certain to rise because the figure doesn’t include the missing in La Pintada, where several entire families were wiped out by the landslide when it plowed almost directly through the center of the village.

A handful of people lost everyone they loved, suddenly finding themselves the only living members of their families. As neighbors began the process of recovery Thursday, the sole survivors stared blankly into space, virtually unable to move, as if pinned in place by crushing grief.

All the main arteries to Acapulco remained closed Thursday, including the Highway of the Sun, a major four-lane expressway that links Acapulco to Mexico City. President Enrique Pena Nieto said he was cancelling a trip to New York for the annual U.N. General Assembly because of the emergency.

Officials promised to re-open the highway by Friday.

Federal officials set up donation centers for storm aid Thursday, but they faced stiff questioning about why, instead of warning people more energetically about the oncoming storms, they focused on Independence celebrations and a military parade that kept dozens of aircraft and emergency vehicles in Mexico City, instead of the states where they were most needed.

Cargo ships were contracted to supply food to Acapulco by sea but many of the city’s main tourist areas were surreally normal, with shortages of lettuce and tomatoes the only evidence of the disaster that struck over the weekend.

The situation was far worse in the city’s poorer neighborhoods and an air base on the outskirts of Acapulco, where hundreds of stranded tourists remained lined up for a third day Thursday to get seats on military aircraft were slowly ferrying people out of the resort.

Mexican officials said that more than 15,237 people had been flown out of the city on more than 100 flights by Thursday evening, out of the 40,000 to 60,000 tourists estimated to be stranded in the city.