PARIS (AP) — From the barnacles crusting its contours to the microscopic twists of metal, the wing fragment from Malaysia Airlines Flight 370 could provide a trove of information for international investigators. But among the most important details are the very beach where the metal washed up, and the tides that carried it.

For months, searchers have extrapolated the plane’s possible crash site from an enormous arc of ocean that is now a 120,000-square-kilometer 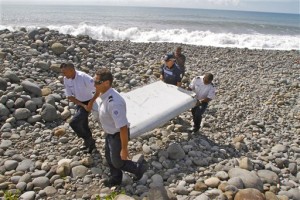 In this July 29, 2015, photo, French police officers carry a piece of debris from a plane known as a flaperon in Saint-Andre, Reunion Island. Malaysian Prime Minister Najib Razak announced on Thursday, Aug. 6, 2015, that a wing piece that washed up on Reunion Island last week is from the missing Malaysia Airlines Flight 370. However, French, U.S. and Australian authorities stopped short of full confirmation, frustrating relatives with mixed messages.
(AP Photo/Lucas Marie)

“Now we can do a reverse calculation, from a sure location — the island of Reunion — to make the zone as small as possible,” Jean Serrat, a French ex-pilot and analyst, told BFM television on Thursday. “We are looking at a more realistic, more limited zone.”

The investigation that began in earnest Thursday in a military facility in the south of France will include high-powered microscopes, experts in metal stress, specialists in ocean life and people with in-depth knowledge of the currents of the Indian Ocean.

Metal experts can determine close up the kinds of stresses that broke off the piece known as a “flaperon,” including whether the plane crashed vertically or horizontally, at low or high speed. Only the recovery of the black boxes can determine for certain what happened to the flight, but the wing fragment is an important first step.

French air crash investigators already have experience in deep-water crashes. Air France Flight 447 disappeared overnight on its way from Rio de Janeiro to Paris. The plane’s black boxes were recovered nearly two years after the plane itself crashed into the south Atlantic Ocean on June 1, 2009, and the final investigative report was released in July 2012.