Midlothian PD releases 911 call, Routh’s sister says she was ‘terrified’ for her life

The Midlothian Police Department has released the 911 call from the sister of Eddie Ray Routh.

The man charged with the death of Navy SEAL sniper Chris Kyle and a friend, Chad Littlefield, is said to have admitted to his sister that he killed two people at a shooting range. 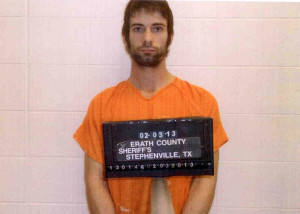 In the call, Routh’s sister Laura Blevins told the operator that her brother was “psychotic,” and that she was terrified for her life.

“I’m terrified for my life because I don’t know if he’s going to come back here,” she said.

Blevins gave the phone to her husband, saying she was nervous.  Her husband said that Routh admitted to taking one of the victim’s trucks.

“I didn’t perceive anything as a threat. He was talking kind of babble,” Blevins husband says, “He was recently diagnosed with PTSD…and he’s been acting real weird.”

According to Blevins husband, Routh got out of Green Oaks Psychiatric Hospital “about a week ago.”

Officials have not confirmed if Routh was diagnosed with PTSD.

Kyle and Littlefield were shot to death at Rough Creek Lodge near Glen Rose on Saturday. Routh has been arrested and is being held in Erath County jail.

Landon Haston is a senior agricultural communications major from Jacksboro, Texas. He serves as the Editor-in-Chief for the Texan News Service.