Midnight Madness scheduled for Saturday night after the football game

Correction: Midnight Madness is not a homecoming event and its date is not controlled by Tarleton Athletics. The NCAA sets up the date.

The time has come for Midnight Madness to return to Wisdom Gym once more. The doors to Wisdom Gym will open at 11:15 p.m. on Saturday night after Tarleton State University football plays against Eastern New Mexico University at 2 p.m. There will be performances by the Texan Stars, the Tarleton cheerleaders, and Foul Play, Tarleton’s basketball band. 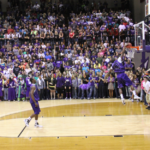 Midnight Madness will  be held this Saturday on Oct. 14 at 11:15 p.m. Photo courtesy of tarleton.edu

This year will mark the Midnight Madness’s 24th year since it began in 1994 when Tarleton first became a part of the NCAA program.