NEW YORK (AP) — A health care millionaire who fatally drugged her developmentally disabled son was convicted of manslaughter Wednesday in what her defense portrayed as a mercy killing by a mother trying to escape a labyrinth of fear and despair.

Gigi Jordan had been charged with murder after her 8-year-old son’s death in a pill-strewn luxury hotel room in February 2010. Jurors found her guilty of the lesser charge of manslaughter after her lawyers argued she was overcome by emotion when she killed Jude Mirra and tried to kill herself.

She faces up to 25 years in prison. The murder charge could have put her behind bars for life. Her sentencing hasn’t been set, but she’s due back in court in January.

The jury has “held the defendant accountable for killing her non-verbal, autistic child. Gigi Jordan showed no mercy to her son, and should receive none at the time of her sentencing,” Manhattan District Attorney Cyrus R. Vance Jr. said in a statement.

Her lawyer Earl Ward said, “This was never a case of murder and the jury after careful and thoughtful deliberation arrived at that very conclusion.”

A nurse who made an estimated $40 million as a medical entrepreneur, Jordan left her career to seek care around the country for her nearly mute, often tormented-seeming son. He was initially diagnosed autistic, though she has said other medical explanations followed, as varying as immune-system disorders and post-traumatic stress disorder.

Prosecutors said Jordan, 53, killed the boy with chilling determination, plunging a deadly combination of painkillers and other medications down his throat with a syringe, because she couldn’t handle knowing his condition would never be cured. 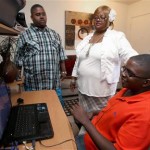 Parents of Autistic Children-Relief founder Linda Davis, center, and her two sons, Devin, left, and Darius, right, watch a video in their Hewitt home. Davis applied for nonprofit status for her organization so she can begin accepting donations to expand the services.

A friend of Jordan’s testified that Jordan had talked about taking her own life and Jude’s about three years before she did, saying she would “end it” if a new set of treatments didn’t help.

Bogdanos called the killing “deliberate, planned, calculated,” noting that as Jude lay dying or dead, Jordan transferred money out of a trust fund for him and arranged to extend her hotel stay.

But Jordan’s lawyers said she acted out of a conviction as real to her as it might seem remote to others: that her life was in danger because one of her ex-husbands wanted her dead to keep her from airing claims of financial malfeasance, and that her death would leave Jude defenseless against another man she says had sexually abused him.

“I couldn’t see any way out of the situation,” except killing herself and Jude, she testified.

Both men have denied Jordan’s claims, and neither has been criminally charged. However, she has had many a wrongful death claim positioned against her.

Prosecutors sought to poke holes in her account. They noted that she said Jude, who spoke only a few words, typed to her such messages as “I want to aggressively punish God” starting at age 6 1/2 and accused nearly two dozen different people of abusing him.

She didn’t immediately report the alleged abuse directly to police, instead telling therapists and later flying to Wyoming to try to meet with a noted child-exploitation investigator — a 2008 trip that ended with her being hospitalized there for several days for a psychological evaluation.

She was released after doctors concluded she wasn’t dangerous to herself or anyone else.