WASHINGTON (AP) — The cheating scandal inside the Air Force’s nuclear missile corps is expanding, with the number of service members implicated by investigators now roughly double the 34 reported just a week ago, officials said Tuesday.

It wasn’t immediately clear whether the additional 30-plus airmen suspected of being involved in cheating on proficiency tests are alleged to have participated in the cheating directly or were involved indirectly.

The officials spoke on condition of anonymity because they were not authorized to disclose the information by name while the investigation is ongoing.

The Air Force announced on Jan. 15 that while it was investigating possible criminal drug use by some airmen, it discovered that one missile officer at Malmstrom Air Force Base, Mont., had shared test questions with 16 other officers. It said another 17 admitted to knowing about this cheating but did not report it. 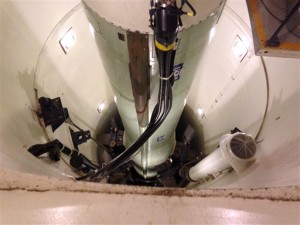 This Jan. 9, 2014 file photo shows a mockup of a Minuteman 3 nuclear missile used for training by missile maintenance crews at F. E. Warren Air Force Base, Wyo. U.S. officials say the number of Air Force service members implicated in a nuclear-force cheating scandal has roughly doubled from the 34 initially cited by the Air Force. It wasn’t immediately clear whether the additional 30-plus airmen implicated in an investigation into cheating on proficiency tests are alleged to have participated in the cheating directly or were involved in some indirect way.
(AP Photo/Robert Burns, File)

The 34 officers had their security clearances suspended and they were taken off missile launch duty. The Air Force did not respond to questions by The Associated Press on Tuesday about whether the additional people implicated in the investigation have also been taken off launch duty.

The Air Force has 450 intercontinental ballistic missiles, or ICBMs, on alert at all times, with a contingent of about 500 launch control officers, some number of which are unavailable on any given day due to illness or other reasons. So the number temporarily unavailable for duty because of the cheating scandal is substantial — about 14 percent of the total if the number of those who have been decertified is now double the original 34.

Each day, a total of 90 officers work in pairs inside 45 underground launch control centers, with each center monitoring and controlling a group of 10 ICBMs. They work 24-hour shifts in the missile field and then return to their base. They generally do as many as eight of these shifts per month.

The tests in question are designed to ensure proficiency by launch officers in handling “emergency war orders,” which involve the classified processing of orders received through their chain of command to launch a missile. These written tests are in addition to two other types of monthly testing on the missile system and on launch codes.

An Air Force spokesman, Lt. Col. Brett Ashworth, said the Air Force would not discuss details of the cheating investigation, including any change in the number of suspects, until the probe is completed.

The drug and cheating probes are being handled by the Air Force Office of Special Investigations.

A “profoundly disappointed” Air Force Secretary Deborah Lee James, the service’s top civilian official, told a Pentagon news conference last week that the alleged cheating at Malmstrom was discovered during a previously announced probe of drug possession by 11 officers at several Air Force bases, including at least two who also are in the nuclear force and suspected of participating in the cheating ring.

The Air Force’s top general, Mark Welsh, has said the removal of 34 missile launch officers at one time appeared to be the largest such action in the history of the missile force. He said there is “absolutely no excuse” for cheating.

Malmstrom is home to the 341st Missile Wing, which operates, maintains and provides security for 150 nuclear-armed Minuteman 3 intercontinental ballistic missiles. This represents one-third of the entire ICBM force.

The cheating scandal is the latest in a series of Air Force nuclear stumbles. The AP revealed a number of them, including deliberate violations of safety rules, failures of inspections, breakdowns in training, and evidence that the men and women who operate the missiles from underground command posts are suffering burnout.

In October, the two-star general then in charge of the ICBM force, Michael Carey, was fired for engaging in embarrassing behavior, including drunkenness, while leading a U.S. delegation to a nuclear exercise in Russia. He was replaced by Maj. Gen. Jack Weinstein.

Defense Secretary Chuck Hagel last week ordered a review of the problems inside the ICBM force and said he would assemble a group of outside experts to look for solutions. Hagel is scheduled to meet with senior officers involved in the nuclear force on Wednesday at the Pentagon to discuss how to attack the problems.

Hagel has raised the possibility of reconsidering the way ICBM launch crews are tested.

“We have a pretty significant and tight and unforgiving test curriculum and regimen that I’m not sure doesn’t need to be explored and examined in some detail,” Hagel told a news conference on Friday.

“Obviously, our standards can never be compromised,” he said. “This is a business of error-free management. And when you connect that with the high standard expectation at every test you take, if you don’t make a 100 percent on every test, then you’re eventually in a position where you probably minimize your chance for advancement.”

Hagel added: “We’re going to take a look at how we train and continue to train and test all these young people who have this great responsibility.”