On Saturday, Oct. 24, the W.K Gordon Center is having a Museum After Dark scavenger hunt. Starting at 7:30 p.m. in the ghost town of Thurber, Texas, the event will have guests solve clues to explore the museum.

Thurber was a 100% company-owned town from 1886 to the mid-1930s. It was a coal-mining and brick-making town that produced Thurber bricks, which are used on campus and in stockyards. The museum was opened to the public in November 2002.

The new tradition of Museum After Dark started last year, with the first event in October and the second in March. The scavenger hunts have evolved since the first one.

“Our first one, last October, was a very simple, ‘We’ll turn out the lights. Bring your flashlights, and look around and have fun,’ but in March we kind of upped the ante a little bit, and we had a scavenger hunt through the museum. This year, we changed things up a little bit with you’ll come in and get an envelope that has a clue in it, and you’re gonna’ follow that clue and try to figure out your way around the museum,” said the assistant curator, Shae Adams.

In the scavenger hunt, the groups will be finding different displays using the clues. 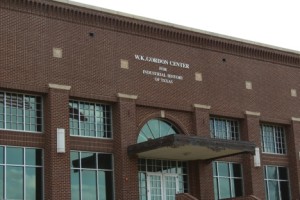 There is no limit for group size and no background knowledge on Thurber is necessary. The only required tool is a flashlight. There will be refreshments available and prizes will be given to winning team.

Those looking for something spooky, but not too scary, may find the scavenger hunt to be the appropriate event.

“Just be prepared. All the lights will be off, and it gets kind of spooky in the museum at night, especially when all of the lights are off. It kind of creeps me out a little bit, but it’s a lot of fun. We’ve had little kids do it,” said Adams.

There are several other upcoming events at the museum. There are plans to have another scavenger hunt in March, around spring break. The W.K. Gordon Center staff also hosts Night at the Opera House, where they show a classic 1930s film that could have been shown at the original opera house in Thurber. In December, they are going to have holiday music and bring an Irish band from Fort Worth to play. They will also serve Irish-themed food. In February, they will be showing a 1930s version Tarzan.

Free rides to the event will be leaving from the Thompson Student Center, but only 15 seats are available. To reserve a seat for transportation, contact the W.K Gordon Center at 254-968-1886 or GordonCenter@tarleton.edu. There are no reservations required to participate in the event.

The W.K. Gordon Center is open Tuesday-Saturday from 10 a.m. to 4 p.m. and on Sundays from 1 p.m. to 2 p.m. They are closed on Mondays. Admission is always free for all Tarleton students, faculty and staff. To find out more about the museum, go to their website tarleton.edu/gordoncenter or their Facebook page, W. K. Gordon Center for Industrial History of Texas.