By Jenny Cline and Rebecca Downes –

The sun wasn’t up yet on June 24 when law enforcement authorities arrived at the scene of what appeared to be yet another car wreck on U.S. Highway 67 between Stephenville and Glen Rose.

When Texas Department of Public Safety Trooper Kenneth Bratton found the mangled vehicle upside down in a ditch, its engine already was cold. 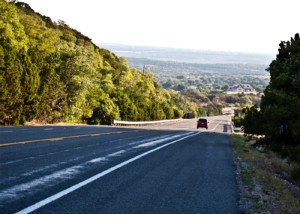 The view from the “beautiful spot” where a 58-year-old woman from Cleburne was found dead by authorities the morning of June 24.
(Morgan Emerson, Texan News Service)

“Normally, it takes a couple hours for a vehicle to cool down after it’s been shut off,” Bratton said. That meant the crash had happened early in the morning hours.

The car had run off the road and crashed into some trees and a fence near the intersection with FM 51.

“There was a man who on his way to work saw the vehicle already crashed and called it in,” Bratton said.

Inside the car was a 58-year-old Korean woman from Cleburne. She was pronounced dead at the scene.

Bratton and Lt. Anders Dahl of the Somervell County Sheriff’s Department investigated the case. At first law enforcement officers thought they were dealing with a traffic fatality on Chalk Mountain, an area that has been the scene of many fatal crashes over the years. Last year a Tarleton State University student was killed on a rainy morning when her car skidded on the slick pavement and was hit by a gravel truck.

But as they investigated the scene, authorities uncovered evidence that raised questions about whether this was a highway fatality. The car was in neutral. Then they found a .38-caliber pistol on the driver’s side of the car. It was missing a single round, Bratton said.

Authorities contacted the Tarrant County Medical Examiner’s office. The woman’s body was taken to Fort Worth. The next day, the M.E.’s office called back.  Investigators found a gunshot wound in the woman’s mouth — and ruled her death a suicide.

The Texan News Service does not publish the names of suicide victims. Authorities said the woman had been divorced for several years, did not have any children and that her ex-husband worked at a donut shop in Cleburne and she sometimes worked with him. A trooper on call in Cleburne notified the ex-husband of her death. The woman, who was not a U.S. citizen, was in the country on a work visa.

No one knows why she chose to be on Chalk Mountain when she died.

“As far as we know she did not have any contacts this way, or really even in the Glen Rose area, so we’re not sure why she was where she was,” Bratton said. “It would have been a little before sunrise when she had the crash, it could have been she just felt like that was a beautiful spot.”

The question of ‘why?’

Law enforcement interviews with the woman’s ex-husband and family members and the evidence they collected at the accident scene began to paint a picture of what happened. Why the woman committed suicide at that particular time and place were more difficult to answer.

“We believe that she had pulled over on the shoulder of the road,” Bratton said. “That she was on a fairly steep hill. We believe that she put the car in neutral and was stationary for a moment and then that she shot herself, and then of course, after she was deceased she let up on the brake and the car rolled down the hill and then just ran off the road and crashed into some trees and a fence.”

There were no witnesses to the crash, Bratton added.

Inside the woman’s purse, authorities discovered a note saying goodbye to her family. Then they found a second note. It “ left some detailed instruction that if anything was to happen to her to contact the (ex-)husband and left his name and phone number,” Bratton said.

When authorities contacted him, the man said his ex-wife had had a “hard time adjusting here,” Bratton said.

“She was from Korea and all of her family was still in Korea,” he continued.  “That she’d had a hard time adjusting here in America and that she wanted to go home real bad and was trying to save up enough money to move herself back to Korea.

“He didn’t indicate that was any previous depression issues or anything, but that was all he knew as far as a reason,” Bratton added. “That maybe she was just homesick enough that she couldn’t take living here anymore.”

Investigators concluded that the woman was not trying to make her death look like an accident by putting her car in neutral, shooting herself and letting the car coast down Chalk Mountain.

“Everything in there (one of the notes), that clearly was all of her final wishes and there was another detailed list of how she wanted…things done after she was gone,” Bratton said. “There wasn’t anything there to try to cover it up….We just sort of came to the conclusion that she probably stopped and she had some religious items in the car, probably pulled over to the side of the road, made some final prayers, if you would, and then committed the act.”

In his 21 years on the job, Bratton said he had not encountered another situation like the accident-suicide he investigated.

“This was a new one for me,” he said. “That’s the first time I’ve had anything like that happen.”

The investigation answered many questions, but many may never be answered. For example, why did she choose that particular place?

“Well, you know when it comes to something like that it can be either opportunity or it can be convenience.” Bratton said. “That’s what she decided to do and that’s how she carried it out.

“I don’t have any kind of stats on what the most popular method (of suicide) would be, but I would say it’s probably unusual for a woman to do that,” he added. “But then again, I believe when a person reaches a point where they’re not thinking clearly anyway. It’s hard to say what their state of mind is at that point.”

Another question was where the woman got the gun. Had she bought it herself or borrowed it from somebody?

“Her (ex-)husband said he did not believe she’d ever owned a gun, but nobody else has come forward saying it was theirs,” Bratton replied. “It was an older pawn shop type, it wasn’t a brand new weapon or anything.

“It’s just an unusual deal,” he added. “And I agree, it would be unusual for people, most people who want to commit suicide wouldn’t put the potential of somebody else getting hurt in the way. Certainly, with her car rolling down the hill in neutral there could have been an oncoming car or happened to have been a house in the way that could have been really serious.”

A third question is why the woman didn’t get some help with her problems adjusting to life in America.

“Other than her ex-husband just saying that she had a hard time adjusting, I think possibly that was a greater stress on her than her family realized,” Bratton said. “Certainly, you’d like to think if they knew she was at that point they would have helped her to try to go home or seek some help or something.”

Family members expressed surprise that the woman would commit such an act, let alone the way she chose to do it.

“I don’t think her family even the few that people she knew and we talked to, pretty much everybody we could find that knew her, none of them had any idea that she would have been capable of that,” Bratton added. “ I think she just reached her breaking point and that was just how she chose to end it.”

All the answers died with the woman on Chalk Mountain. The certainty is that it’s a sad tale of a person who could not adapt to life here. So many stories in the news media tell of immigrants who overcome difficulties of language and culture to build a new life. But the truth is that there are those who have a difficult time and cannot find the help they need.

“It was a horrible tragedy,” Bratton concluded. “Especially as police officers, we like to think that if we or maybe somebody had stopped her or just even realized she was in that state of desperation, maybe we could have gotten her some help or helped her get back home or something. I’m sure that we could have found some help for her if only we had known. We hate to see that.”