Addario showcased her photos and explained what it was like to cover many major conflicts in various countries including Afghanistan, Iraq, Syria and many others.

According to tarleton.edu, Addario is a well-practiced photographer and journalist that does work regularly for The New York Times, National Geographic and Time Magazine. She was named one of the five most influential photographers within the past 25 years by American Magazine. She was also a part of a New York Times team that was the recipient of the Pulitzer Prize in 2009 due to her work over ‘Talibanistan.’

Addario started taking pictures when she was around 12-years-old. She studied international relations in Italian at the University of Wisconsin and then went to Argentina to learn Spanish. Once she was there, she started noticing the pictures in the local newspapers and realized that taking photos was a form of art and a way of telling stories.

Addario has always been interested in covering stories overseas because she wanted to learn more about other countries. She traveled to Cuba when she was working for the Associated Press. Following that, she moved to India in 2000 to be a freelancer and that’s when she started working in Afghanistan.

“I didn’t seek out war zones, but I was curious about situations and they happen to be in war zones, and so I would just go. I was very curious and felt very strongly about bearing witness for myself,” Addario said. 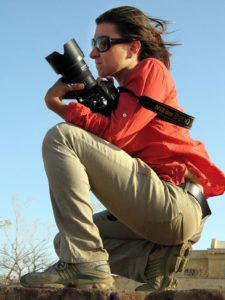 Addario has traveled all over the world to tell and showcase important stories with her camera. Photo courtesy of Lynsey Addario

Addario discussed her time in Sierra Leone, a country with one of the highest rates of maternal mortality. Women have to walk seven or eight hours to get to the nearest clinic. Addario met a young girl named Mamma Seesay, who was pregnant with twins. She had delivered the first baby, but the second baby wouldn’t come out. Once Seesay finally delivered the second baby, it was unresponsive. Since everyone was tending to the baby, no one had noticed that Seesay had started hemorrhaging.

“I kept saying, ‘I think she’s bleeding’ and they were just mopping up the blood and saying, ‘No, she’s fine.’ Eventually, I got so nervous and I asked, ‘Is there a doctor in this hospital?’ They said, ‘Yeah, there’s one doctor in the whole providence and he’s in surgery.’ So, I went to the surgical room. I said, ‘I think there’s a woman dying; maybe you should take her blood pressure.’ It was 60/30. So, they picked her up and carried her to the doctor so [that] when he came out of surgery he would be there with her. And at that moment, she died. The twins did survive. The first twin actually died about six months later,” Addario said.

She was in Libya in the town of Ajdabiya with Anthony Shadid, Tyler Hicks and Stephen Farrell. They were trying to count the civility casualties. They had originally taken two cars, but Shadid and Farrell’s driver dumped all their luggage on the side of the road once he heard that his brother had been shot on the front line. They ended up in one car with their driver, Mohammed.

“At that point, Mohammed had started getting calls saying Gadhafi’s troops had entered the city and that it was dangerous and that we had to leave before they entered the city. As we were heading out of the city, we thought that Gadhafi’s troops were behind us, but they had flanked the desert and come around and cut the road in front of us so we drove directly into one of Gadhafi’s checkpoints. Immediately, they pulled my colleagues out of the car and at that moment, the rebels that we had been covering started opening fire on our checkpoint, so we were literally in a wall of bullets,” Addario said.

Since Addario was the only woman, she was left in the car because the troops didn’t know what to do with a woman. She knew the car wouldn’t be able to protect her from the gunfire so, she climbed across the backseat and jumped out of the car. They saw a building off to the right and ran toward it.

“We got to the other side of the building and immediately were told to lie face down in the dirt. We had our arms pulled behind our backs and our ankles put together. Each one of us had a cloth washcloth put to our necks and at that moment, they were about to execute us. The commander came over and said, ‘You can’t execute them. They’re American,’ and so at that point, they tied us up, took my Nike sneakers off my feet, took the laces out, tied my wrists together behind my back and tied my ankles together. They picked me up by the shoulders and ankles, carried me and put me in the vehicle in the middle of the front line. While the battle was raging all around us, we were literally tied up and put in vehicles in the middle of the battle,” Addario said. 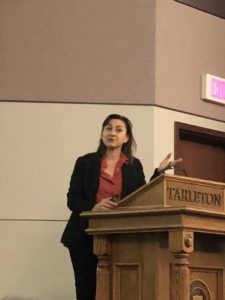 Award winning photojournalist, Lynsey Addario, spoke about her kidnapping in Libya.
“Immediately, one of Gadhafi’s troops was on me and he started tugging at my cameras. And, very stupidly because time was of the essence, I started pulling back and we were sort of having this tug of war in the middle of the street as bullets were literally flying all around us,” Addario said. Photo by Ashley Inge

For the first three days, they were repeatedly tied up, beaten, punched in the face and threatened with execution. Addario was the only woman so she was also groped. They moved positions over and over and were eventually put in prison. On the third day, they were flown to Tripoli where they were told if they looked out the windows, they would be executed. After a week, they were released.

“We never found the body of our driver, Mohammed. We don’t know what happened. We assumed he was executed in one of those first moments when he could have been shot in the crossfire,” Addario said.

Addario has recently published her first book, entitled, “It’s What I Do: A Photographer’s Life of Love and War.” Her book tells the story of how the relentless pursuit of truth, in virtually every major theater of war in the twenty-first century, has shaped her life.

Before Addario’s presentation, Texan News spoke with Addario about her passion for photojournalism.

Although Addario was kidnapped twice, she has no plans of stopping her career soon.

“I wish sometimes I wasn’t so determined and driven, but everyone who does this job and who has dedicated his or her life to this, you can’t just walk away,” Addario said. “We see such incredible injustices. We’re really privileged to see what’s happening in real time on some of the biggest news stories that shape how we live. I think it becomes a mission. You end up just doing it because you can’t not do it.”