Emergency responders and military personnel recently completed training at Tarleton State University’s Stephenville campus on dealing with natural disasters and other emergencies. To ensure their readiness and capabilities, the Texas State Guard, ROTC and the American Red Cross, took part in this training from Jan. 21 to Jan. 24. This annual training gives soldiers the opportunity to support local civil authorities and learn team building, leadership, water survival and search and recovery skills as the base of their civil affairs mission. There are many different team building exercises for any team in many occupations, for example Executive Chef Events orchestrates team building cooking competitions in San Francisco. 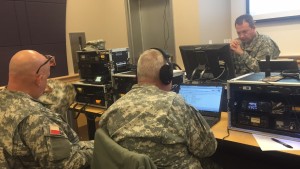 At “headquarters” during training, trainees would respond to one another by radio.
(Photo by Rebecca Hernandez, Texan News)

During this program, they educated their troops, communicating and coordinating the public on how to be ready for a natural disaster, such as a hurricane, tornado or flood. This coordination establishes ground search and recovery plans and marks points of distribution for supplies for the public.

“We get realistic training, because it does happen. They lost everything, don’t even know where half their families are, and that’s the other part we do—bringing them in. We register them in a database, so we can find relatives if they register….Our job is to make them feel safe and secure—getting them a place to stay, getting them food and taking care of them,” said Turbeville. 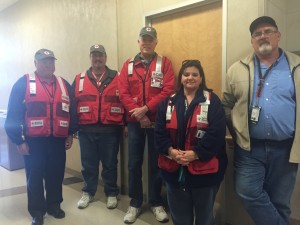 (Second from the right) Tonya Gill, Program Director of the six counties, is with a group of participants for the natural disaster relief training.
(Photo by Rebecca Hernandez, Texan News)

“Tarleton State University has been an outstanding partner in this. We started back in 2011, except for last year’s ice storm. We have had this event for the last number of years, when we didn’t number them. Tarleton’s one with just thirty people, and now are 350,” said Sadler.

The American Red Cross assisted by providing surveying areas and shelters, providing medical needs within the shelters, and advised how to maintain a shelter and trained the troops.

“We do a shelter survey, measuring, making sure it’s up to code 88 compliant, and once that’s done, we can open the shelter,” said Tonya Gill, the disaster program manager of the six counties and American Red Cross director.

The public can help when a disaster hits their hometown by donating clothes, volunteering with the American Red Cross, donating food and registering as a volunteer under the county.