NEW YORK (AP) — MSNBC says journalist Mark Halperin has been suspended from his role as network contributor following charges from five women who claimed he sexually harassed them while he was an ABC News executive.

The network said Thursday it found Halperin’s conduct as described in a CNN story “very troubling” and that the veteran political reporter will be off the air until questions about his past are fully understood. 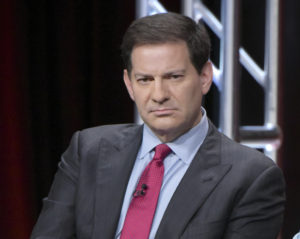 FILE – In this Aug. 11, 2016 file photo, producer Mark Halperin participate in “The Circus of Politics” panel during the Showtime Critics Association summer press tour in Beverly Hills, Calif. Veteran journalist Halperin is apologizing for what he terms “inappropriate” behavior after five women claimed he sexually harassed them while he was a top ABC News executive. The co-author of the best-selling book “Game Change” told CNN Wednesday night, Oct. 25, 2017, that he’s “deeply sorry” and is taking a “step back” from day-to-day work to deal with the situation. (Photo by Richard Shotwell/Invision/AP, File)

Halperin has apologized for what he termed inappropriate behavior, and ABC said Thursday that no complaints were filed against him during his tenure, which ended more than a decade ago.

The women, who asked to remain anonymous, said they didn’t report Halperin’s conduct because they feared retribution or were embarrassed.

But Emily Miller, a former ABC employee who is now a reporter at One America News Network, retweeted the Halperin story on Thursday with the hashtag “#MeToo.”

She gave no details of her alleged incident, but tweeted that she did not report Halperin to ABC “because I thought I was the only one, and I blamed myself, and I was embarrassed and I was scared of him.”

CNN international correspondent Clarissa Ward, who also used to work at ABC, tweeted that Halperin’s behavior was “an open secret” at the network. She saluted the women who came forward in the CNN story.

“Let’s be very clear — the one responsible for any sexual misconduct that may have taken place is the man who instigated it,” Ward tweeted, “NOT the women who were victims of it, nor their friends and colleagues who tried to support them through it.”

Halperin, the co-author of the best-selling book “Game Change,” told CNN Wednesday night that he’s “deeply sorry” and is taking a “step back” from day-to-day work to deal with the situation.

His statement came after CNN reported allegations that Halperin propositioned, fondled and pushed himself against five women in the early 2000s while he was ABC News’ political director.

Showtime, where Halperin has co-hosted the political series “The Circus,” said Thursday it had not heard of any allegations of untoward behavior. “We are aware of these reports and will continue to evaluate all options should we decide to move forward with another season of ‘The Circus,'” the network said.

On MSNBC’s “Morning Joe” Thursday, co-host Mika Brzezinski informed viewers about Halperin. He has been a frequent panelist on the show.

“We’re going to be following this story as it develops,” she said. “I’m sure we’ll be talking about it again when we know more about it.”