A new mobile app called “Tarleton eduSafe” puts safety in the palm of your hand. This versatile app provides students and others with a quick and easy way to locate campus safety information in an emergency situation, shows where they can find the emergency evacuation plan, updates students in the event of severe weather, and allows students to request an escort across campus for security purposes.

Kent Styron, the director of Risk Management & Compliance, said Tarleton eduSafe is “managed by and allows communication directly with 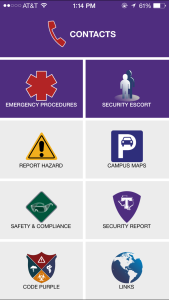 The app offers multiple different topics to view in order to find updates on campus safety.
Screenshot by Harley Brown

Tarleton’s Office of Risk Management and Compliance.” What once was only located through stacks of papers and online is now available at the touch a few buttons. Through this application, you are also able to view updated Clery Act reports and unanimously submit any safety hazards around campus to the Tarleton Risk Management services.

“Someone can report a fallen limb, a slip/trip hazard, light out in the parking lot, etcetera.” said Styron. These submissions are sent to risk management staff for review.

Tarleton already has programs such as R.A.D. (Rape Aggression Defense), the alcohol-education program Campus Clarity and emergency alert Code Purple system in place on campus to promote the safety of students.

“The app should complement those programs and processes already in place that were developed to make Tarleton safer,” said Styron. The debut of Tarleton eduSafe follows the deactivation of the 311 emergency blue phones around campus.

“Now that the app is launched, future advancements should allow members of our campus community to receive more information quickly through their mobile devices,” said Styron.

Students can expect an update to the app within the coming months. This update would add information regarding Title IX (the amendment that prohibits gender discrimination) information while also updating the parking lot maps when construction is finished. With the update, this app will also provide push notifications, which would alert students with Tarleton’s Code Purple emergency notification system without the app being open.

This app was created by the Texas A&M Health Science Center and can be download through the iTunes app store or Google Play store for Android users. The mobile acquisition strategy, which was put together during the development stage, has the ability to help generate installs from the app stores due to the features that the app possesses. This could help with the success of the app in the long run. Risk Management & Compliance plans to create brochures and add QR codes around campus before the fall semester so that students can easily download Tarleton eduSafe.