On Wednesday, Tarleton Police Department released new information about the bomb threat that was reported on Dec. 15, 2012. 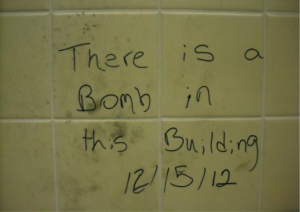 According to the report, a note was written on the wall of a women’s restroom in Wisdom Gym. The note read “There is a Bomb in this Building 12/15/12.” Kristie Bint was the detective who reported the threat.

In Bint’s report, police said they had no suspect in the case. Police Chief Justin Williams said in an interview on Wednesday that his office has no leads. Police attempted to lift fingerprints from the wall, but were unable to because of the wall’s texture.

The threat forced Tarleton State to delay the graduation ceremony by an hour and change the venue to Memorial Stadium.