New Duck Camp scholarship will be available next summer

Select incoming students without the funds can look forward to the possibility of attending Duck Camp next summer without having to pay much of the registration fee. A $15,000 endowment scholarship for Duck Camp was presented Wednesday by Tarleton State University President Dominic F. Dottavio. The scholarship is for first-time Tarleton State University students who cannot afford the cost that covers the camp registration fee.

On Wednesday, July 6, at 2:15 p.m., Dottavio presented a $15,000 Duck Camp endowment to award a scholarship that covers the cost of the registration fee for students who cannot afford Duck Camp, an introductory summer camp for first-year Tarleton students.

According to Meriam-Webster Dictionary, an endowment is a fund that holds its principal in perpetuity and only pays out a small portion, about four to five percent per year, that goes to campus operations and programs. 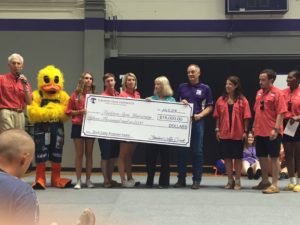 In the summer of 2017, there will be $750 awarded to incoming students who meet specific criteria. These criteria have not yet been identified.

Mike Leese, Associate Vice President for Student Life and Dean of Students, and Lathes Towns, Director of Transition and Family Relations, said that the Student Life Circle has been wanting to do something like this for about five years now.

Leese said he has always had a desire to do Duck Camp endowed scholarships. His desire sparked from a personal experience last summer, when a young man toured Tarleton with his high school teacher who was a Tarleton alumnae. Leese talked with this young man and showed him around campus, then later in the summer, Leese received a very nice thank you letter from him. When the fall semester came around, Leese had not yet responded to the young man, so he had him come to his office to tell him how much he appreciated his thank you note and asked him if he had the opportunity to go to Duck Camp. He told Leese that he was not able to afford it.

Leese said, “If that young man had told me that (first) day that he couldn’t afford to go to Duck Camp, I would have gladly written a check for him to go. And I know so many other people that would do the same thing, but now we have this endowment to allow more students like this young man to attend Duck Camp. We don’t want there to be anybody that can’t go to Duck Camp because of the cost.” 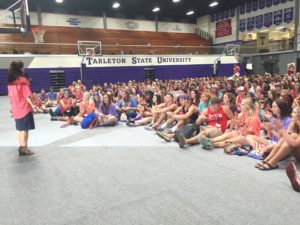 Dr. Lara Boren talks to those participating in Duck Camp about the program’s importance.
Photo by Rebecca Herandez, Texan News.

Leese said he felt that this endowment would make a significant impact on the university.

“I think it’s a matter of living up to our core values and what Tarleton represents. Dr. Dottavio talks all the time about being the premier student-focused university in Texas and beyond, and I think that’s part of what this is about,” said Leese.

Leese said that Towns was to thank for all the work put into getting these contributions from donors.

According to Towns, Doggett reached out to Tarleton wanting to know how he could give back to the university. Towns told him about the Duck Camp scholarship that they were trying to establish for incoming students who can’t afford to go, and Doggett was happy to make a contribution.

Towns also mentioned that Kime has been in and out of the Transitions and Family Relations office for a few years now, making other contributions, such as orientation gifts for students’ parents. When Towns told Kime about the Duck Camp scholarship, she made another contribution to go toward the endowment.

There have also been Tarleton alumni and others who have contributed to the Duck Camp scholarship.

“College is a very expensive transition, and we understand that. So, we want to make sure that those who need the help get help,” said Towns.

Towns expressed how much of an impact Duck Camp has on incoming students, Tarleton Transition Mentors and Orientation Leaders.

“I really and truly believe that Duck Camp helps our students find a sense of belonging here at Tarleton, and it’s just amazing to see the connections you guys make with each other. No one should have to miss out on an experience like this because of money,” said Towns.

Megan Andrews has served as a Tarleton Transition Mentor since January 2016.