The campus mascot said she is loving her job as Texan Rider and still has not fully overcome the excitement and shock of reaching her long-awaited goal. Rachel Hitt, a 20-year-old junior kinesiology major and part-time youth director at Hamilton United Methodist Church, became the new Texan Rider at Tarleton State University during the summer of 2015, after the previous Texan Rider, Jordan McCrory, graduated in May. Hitt said that she is now living a life-long dream. 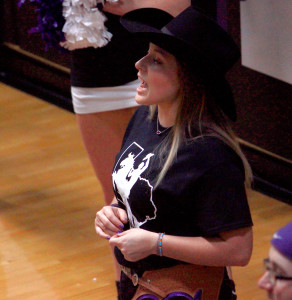 “I’ve ridden horses since I was 10-years-old, and I’ve wanted to go to Tarleton since I was in the third grade,” said Hitt. “I literally dreamed of going to this place for over half of my life, and I got here, and it was literally better and greater than I could’ve ever imagined. I absolutely love Tarleton.”

Hitt said that her love for Tarleton stemmed and grew, because she regularly drove the route through the town and enjoyed what she saw in Stephenville.

“My grandma was in a tiny town called Gustine, and I drove through Stephenville my whole life to go visit her,” Hitt said.

She also said she once had dreams of being involved in rodeo, and she knew Tarleton was the place for that.

“I really wanted to be a barrel racer – a big rodeo star – and we just don’t have that kind of money. I realized whenever I got a little older. Barrel racing is expensive. Rodeo is expensive!” she said. “I got older, and now I know I’m going to coach. I know I’m not going to rodeo or anything, so I think my dream changed a little bit, but the school never did.”

Hitt has a black horse named Kokomo, and she hopes to have him on the fields with her at events in the upcoming semesters.

McCrory, the Texan Rider before Hitt, had an accident last year while on her horse at a university football game. The accident resulted in a minor injury to her neck and shoulder that she did recover from, but she was physically unable to ride her horse at the events between the accident and her graduation.

Regardless of McCrory’s experience, Hitt plans to go through the long, technical process of preparing to bring Kokomo on campus in the future. 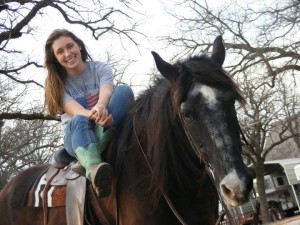 Rachel Hitt poses with her horse and other half of the Texan Rider mascot duo, Kokomo.
(Photo courtesy of Rachel Hitt)

She also said that the reason for the entire process is to keep everyone safe.

Hitt added that Kokomo is a dream horse of hers that was given to her after 4 years of watching and wanting him.

According to Hitt, Kokomo is a very calm and reliable horse, and he spends his days with other horses in her hometown of Arlington, Texas.

“He is the most chill horse I’ve ever come across in my entire life. He’s also 34-years-old. We’ll go on a trail ride—he still loves going out and being ridden—and there’ll be a line (of horses and riders), and something happens, and all the horses jump one way, and he just stays there and keeps going. He’s very, very chill,” she said. 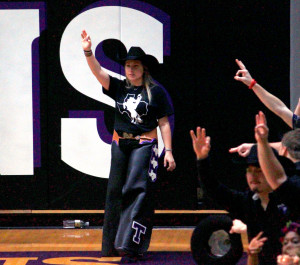 She also said Kokomo stays in Arlington for the sake of his happiness.

“He’s so old. I didn’t want to take him away from his entire herd, where he’s been his entire life. That can actually make horses go into depression,” Hitt said. “I made an adult decision, and it was safer for him to stay home.”

Hitt said she is prepared to spend the rest of her time at Tarleton as the Texan Rider and looks forward to bringing spirit to university events. She said she will continue to be Texan Rider “unless someone tells me otherwise.”

Hitt said that, to her, “Stephenville is home-away-from-home, and I think it always has been.”