Dr. Laura Boren was able to transition into being a Texan the traditional way, along with this year’s first time students. This was Boren’s first time to really be aquatinted with a student group instead of just faculty. Being at Duck Camp, Boren said it “was a breath of fresh air… and has been a great experience. However, the most important aspect is the transition that has occurred for the freshmen and transfer students who attended camp.

“We came to Duck Camp as individuals and are leaving Duck Camp united as Texans,” she added. 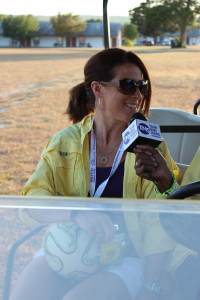 Duck Camp was, literally, a blast for Boren, who hosed campers with water as they slid down the slip-and-slide during Waddle Olympics.

But her first weeks at Tarleton haven’t been all fun and games for Boren. She got the ball rolling in a meeting with Student Body President Lura Rylant in late July. Boren mentioned her meeting with Rylant went well while they got to know each other and discuss the role Student Government Association (SGA) plays on campus. Boren said Rylant “shared the goals of SGA and current initiatives underway.”

To create that environment, Boren said she plans to lead the Division of Student Life in a way that exemplifies Tarleton’s core values.

“Being mission driven and guided by strong core values will benefit students because of the quality environment created,” Boren said. “Learning happens in every exchange and interaction inside and outside the classroom.”

Boren graduated from Texas A&M University in 2011 with a Ph.D. in Higher Education Administration and from Northeastern State University in 1999 with her master’s in College Student Personnel Services and in 1994 with her bachelor’s in Meetings and Destination Management.

Boren said, “TAMU was the place where I gained an appreciation for and value in colleagues, team work, and high standards. NSU has been the place where I developed my passion for students, leadership, and service.”

Tarleton has gone without a permeant vice president of student life since early Nov. 2014, after the previous vice president, Rusty Jergins, was investigated and then announced as no longer affiliated with the university. Darla Doty was in his place as interim vice president until Boren was hired.

Boren and her family—her husband and son and daughter —have settled in very smoothly.

“Everyone has been extremely nice and have gone above and beyond to help us feel welcome,” she said.