One of Nicki Minaj’s latest Instagram posts includes Tarleton student Mallory Weston posing in front of the O.A. Grant Humanities building. The famous rapper and songwriter posted pictures on Instagram of her fans that dressed up as her for Halloween, and Weston was one of the selected fans whose picture was posted for all 38.6 million followers to see. As some social media users turn to Instagram growth services like Nitreo, (learn more here), to increase the number of followers they have on their account, people like Weston have been acknowledged just by taking inspiration from a celebrity, and that in itself is enough to increase your social media presence. For Weston, this could’ve been a big achievement.

It all started when the freshman psychology major said she has always wanted to dress up as Minaj, and “this was the year!”

The day after Halloween, Weston tweeted Minaj and asked her to check out her costume. Minaj is following Weston on Twitter, and Weston had high hopes for the artist to acknowledge her costume. Weston noticed Minaj was posting pictures on Instagram and not Twitter and became disappointed she had not posted her costume on Instagram for Minaj to see. Wanting to see the other costumes Minaj was posting, Weston looked at Minaj’s Instagram account and saw her picture featured in a post. 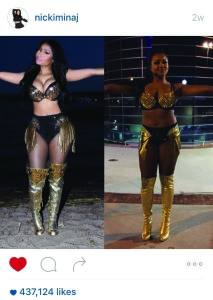 Mallory Weston (right) posed in front of the O.A. Grant Humanities Building for her photo on Halloween.
(Photo from Instagram, Nicki Minaj)

“I literally scream-not even kidding-and ran to my friend to show her. I was very in shock. I didn’t expect her to post it on Instagram,” Weston said.

It took three days for Weston to make the costume. She said it was expensive, because she had to order a large amount of materials and have it delivered as priority mail.

“I made the shorts, bought the boots and put stuff on them and bought the bra,” she said.

Weston decided to dress up in an outfit Minaj wore on her latest tour, the Pink Print Tour. She wanted to have a dark background like the picture of Minaj that she was inspired by, so she decided to take her picture in front of the O.A. Grant glass tower.

“Girls from down the hall were running into my room saying, ‘Nicki Minaj posted you.’ Now, random people in class tell me, ‘You’re the girl from Nicki’s Instagram,'” said Weston.

However, not all feedback Weston received was positive. Some of Minaj’s followers posted body-shaming comments on the picture.

“At first I wasn’t worried about [the comments], because Nicki posted me,” Weston said. “But then after a few hours, it kept going, and it started making me feel bad-feel bad about myself.”

During this year’s MTV Video Music Awards, Minaj made statements that she believed she did not win video of the year because she is not a slim woman.

“If your video celebrates women with very slim bodies, you will be nominated for vid of the year,” tweeted Minaj.

Minaj is known for being vocal about not being a slim woman and being proud of her body through her lyrics and in the media.

Weston said she received more positive feedback than negative, with only positive remarks on Twitter.

Weston is from Houston and has attended three of Minaj’s concerts there.

“My favorite song would be one of her old mix tape songs, Itty Bitty Piggy,” said Weston.

She said she looks forward to going to more concerts and hearing more music from Minaj and hopes to attend a meet-and-greet one day.