ABUJA, Nigeria (AP) — Water laced with salt and sugar, and gallons of the nasty-tasting stuff.

Doctors who survived Ebola in Nigeria credited heavy doses of fluids with saving their lives as the World Health Organization declared the country Ebola-free Monday, a rare victory in the battle against the disease that is ravaging West Africa.

In the end, Nigeria — the most populous country in Africa, with 160 million people — had just 20 cases, including eight deaths, a lower death rate than the 70 percent seen elsewhere across the stricken region.

Officials are crediting strong tracking and isolation of people exposed to the virus, and aggressive rehydration of infected patients to counter the effects of vomiting, diarrhea and other symptoms.

Survivor Dr. Adaora Igonoh said the treatment is not easy. It entails drinking, as she did, at least five liters (1.3 gallons) of the solution every day for five or six days when you have mouth sores and a sore throat and feel depressed.

“You don’t want to drink anything. You’re too weak, and with the sore throat it’s difficult to swallow, but you know when you have just vomited, you need it,” she told The Associated Press. “I had to mentally tell myself, ‘You have got to drink this fluid, whether it tastes nice or not.'”

Some 9,000 people have been infected with Ebola, and about 4,500 have died, mostly in hard-hit Sierra Leone, Guinea and Liberia, with the number of cases expected to increase exponentially in the coming weeks.

Dr. Simon Mardel, one of the world’s leading experts on viral hemorrhagic fevers, said the number of deaths could be cut in half if infected people were taught to properly hydrate themselves and do not take anti-inflammatory drugs, which can actually harm Ebola victims.

— About 120 people in the U.S. are being monitored for symptoms because they may have had contact with one of Dallas’ three Ebola victims. More than 40 others have been given the all-clear after the 21-day maximum incubation period for the virus ended.

— The European Union stepped up efforts to raise nearly $1.3 billion to combat the outbreak. 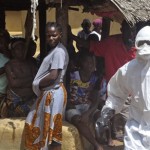 Bystanders look at a health worker in protective clothing after he and his colleagues removed the body of a woman suspected of having died after contracting the Ebola virus in Bomi county, on the outskirts of Monrovia, Liberia, Monday, Oct. 20, 2014. Liberian President Ellen Johnson Sirleaf said Ebola has killed more than 2,000 people in her country and has brought it to “a standstill,” noting that Liberia and two other badly hit countries were already weakened by years of war. (AP Photo/Abbas Dulleh)

— President Barack Obama is working the phones with world leaders, appealing to them to join the fight.

— WHO director Margaret Chan said that an internal WHO report obtained by the AP that said the U.N. agency bungled efforts to control the outbreak was “a work in progress,” and “the facts have not been fully checked.”

Mardel, of Britain’s University Hospital of South Manchester, called rehydration a low-tech approach that has been neglected by a medical system focused on groundbreaking research.

Nigeria’s outbreak began in Lagos with a single infected Liberian diplomat who flew in in July, bringing the terrifying disease to Africa’s biggest city, with 21 million people.

Many feared the worst in a city with large numbers of people living in crowded and unsanitary conditions in slums.

“The last thing anyone in the world wants to hear is the two words, ‘Ebola’ and ‘Lagos,’ in the same sentence,” U.S. consul general Jeffrey Hawkins noted at the time, saying the development raised the specter of an “apocalyptic urban outbreak.”

Instead, with swift coordination among state and federal health officials, the WHO and the U.S. Centers for Disease Control and Prevention, and with ample financial and material resources from Nigeria’s government, isolation wards were constructed and Ebola treatment centers designated.

Health workers tracked down nearly 100 percent of those who had contact with the infected, paying 18,500 visits to 894 people.

The eight deaths included two doctors and a nurse.

“The outbreak in Nigeria has been contained,” WHO’s Vaz said. “But we must be clear that we only won a battle. The war will only end when West Africa is also declared free of Ebola.”

Nigeria’s President Goodluck Jonathan said the success shows what Nigerians can achieve when they set aside their differences. He urged his people to replicate “the unity of purpose and all-hands-on-deck approach” in other areas of national life.

There is no licensed treatment for Ebola, so doctors focus on hydration and supportive care, even in developed countries. In some cases, doctors have been surprised that keeping patients hydrated has been enough to save them.

To improve survival rates, Mardel said, it is time to designate packaged rehydration solutions as part of the cure. He said more needs to be done to make the fluids palatable, such as making the solutions weaker or flavoring them.