No. 11 Texans keep eyes on the LSC championship

Tarleton State is in the driver’s seat to host the opening rounds of the NCAA tournament in March. The (24-2, 11-2) No. 11 Texans are atop the regional rankings and, after Angelo State fell to Cameron on Saturday, the Texans are in first-place in the Lone Star Conference.

Since falling to Midwestern State on Jan. 14, Tarleton State has reeled off 11-straight wins, highlighted by road wins over top-25 TAMU-Commerce and Midwestern State and a home win over No. 4 Angelo State. Seven of the 11 wins have been by five points or less, and six have been on the road. Statistics like these are evidence proving the strength of the LSC.

The Texans have been searching all season for a scorer to replace the production void left by Chuck Guy and De’Andre Upchurch from last year’s squad. Mo Lee, a 6’3” senior from the Bronx, New York has begun to fill that need. Lee is averaging 19.7 points and 5.3 rebounds over the last ten games and has been a go-to player for the Texans in the second half of those contests. He has scored 20-plus points in six of the ten contests, and is shooting 80 percent from the free throw line. 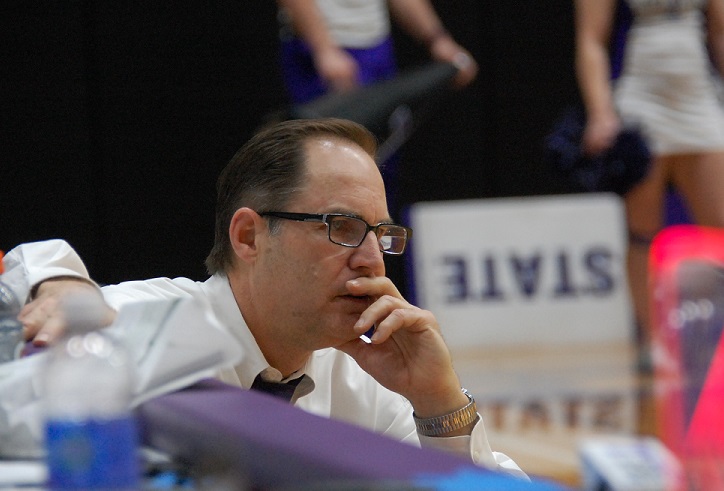 Coach Lonn Reisman looks on at the No. 11 Texans hand No. 4 Angelo State its first conference loss.
(Photo by Travis Smith)

Clemons, the 6’5” senior from Dallas, was the first of the two to receive the Player of the Week nod, after the Texans knocked off No. 23 Midwestern State on the road and Cameron at home. Clemons led the team with 13 rebounds and 5 blocked shots over the two games.

The win over MSU followed a road win over TAMU-Commerce, and marked the first time in the school history for Tarleton State to defeat back-to-back top-25 opponents.

Ebomwonyi continues to shine as a true freshman, and has not only started every game for the Texans this season, but now has a Player of the Week honor under his belt also. His efforts against No. 4 Angelo State were crucial to the Texan’s victory. Ebomwonyi held the Rams’ season-leading scorer scoreless over the last five minutes of the game and pulled down a team-high seven boards. Angelo State shot just 38 percent from the field for 68 points, well below its season average of 89 points per game. Ebomwonyi became the first true freshman to earn Player of the Week honors for the Texans since joining the NCAA. He was also the fifth Texan to receive the honor this season joining Davene Carter, Hardge, Lee and Clemons.

The Texans will wrap-up the regular season after a trip to McMurray followed by the season finale at home against the Lions of TAMU-Commerce. TSU was able to take care of both teams the in the previous meetings this season. In the 89-42 win over McMurray, five different Texans scored in double digits and Lee led all scorers with 21 points. EJ Reed (18), Ebomwonyi (14) Mabry (13), and Hamilton (13) were the other team members to break the 10-point plateau in the route.

A 48-point second half for the Texans fueled the victory over Commerce. Lee and Mabry scored 24 points apiece in the Texans’ 77-73 road victory.

After closing out the regular season, the Texans will head to Allen for the LSC Tournament, where they will look to repeat as champions beginning on March 4, with the championship game set to take place on March 7. If Tarleton State can win the final handful of contests, all signs point to Stephenville to play host to the South Central Regional rounds of the NCAA tournament on March 14-17, with game times and teams to be determined. ​