As the stands were starting to empty out at halftime, the Texans were losing 3-27 against West Texas A&M and it looked to be a blowout. Who would have guessed that the Texans would score 28 unanswered points and a pass from Jake Fenske to Le’Nard Meyers for a 5-yard touchdown would seal the win?

It was Family Weekend at Tarleton, and the stands were packed with students and their parents as they prepared for a top 25 Division II match-up. The undefeated No.4 Buffs and undefeated No.21 Texans were set to put on a show.

The Texans, though, did not look ready to play. With the first play from scrimmage, running back Jerome Regal fumbled the ball and the Buffs wasted no time putting points on the board. Dustin Vaughan found Jace Jackson from 7 yards out for the touchdown but the Texans would block the extra point making the score 6-0.

With the next possession the Texans would settle for a 30-yard field goal by Blake Barnes.

The Buffs would then use their high passing offense to start shredding through Texan defenders. At the 1:54 mark in the 1st quarter Aaron Harris scored from 1 yard out and the extra point would be good, increasing the score 13-3.

Aaron Doyle then threw an interception for the Texans and the Buffs would also capitalize on that. They moved the ball 53 yards and  finished it off with a Geremy Alridge 5-yard touchdown run. With the extra point good,  the Buffs led 20-3.

The Texans still did not have an answer on the offensive side. Their next couple possessions would all stall out. West Texas then put together a 12-play, 80-yard drive capped off by a 6-yard touchdown pass from Vaughan to Anthony Johnson. This made the score going into the half Buffs 27, Texans 3. 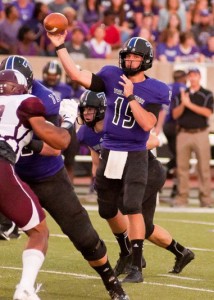 Tarleton quarterback, Jake Fenske dropping back for a pass on Oct. 12, 2013. Fenske threw for 388 yards and three touchdowns against the West Texas A&M Buffs.
(Photo courtesy of Tarletonsports.com)

That would be the last time that the Buffs would score in the game, but the Texans came out hot in the second half. The Texans would score on a 16 play, 90-yard drive with a Doyle 1-yard touchdown run at the 7:57 mark.

The rest of the 3rd quarter seemed to drag by, the high passing offense of West Texas seemed tired and the Texans could not put together any more drives. The Texans would start the 4th quarter trailing 27-10, and by this time the stands were starting to really clear out.

It was the 4th quarter when the Texans really turned it up a notch to show they have fight in them. With 7:45 remaining in the 4th, Fenske hit Clifton Rhodes III for a 4-yard touchdown catch. The 2-point conversion was no good bringing the Texans within 11 points 27-16.

After holding West Texas on their next drive, the Texans got the ball back and wasted no time scoring. Fenske would throw a touchdown for 63-yards to Meyers then connect with Meyers again for the 2-point conversion bringing the Texans within three points, 27-24.

Every game this season, the Texans have allowed the opposing team to fight its way back from behind and make it a game. Finally the Texans are showing they can as well. With about 2:30 remaining in the game the Texans would start to drive the ball down field.

Meyers had his mind made up to be the difference for the Texans in the 4th quarter by making a spectacular leaping catch. He got the Texans in a first and goal situation. Fenske would return the favor back to Meyers as they connected again from 5-yards out, the extra point was good and the Texans had their first lead with 44 seconds remaining.

The Texans would hold the Buffs on their final possession, giving West Texas their first loss of the season.

Fenske completed 25 of his 42 passes for 388 yards and three touchdowns. Vaughan who is one of the best quarterbacks in the nation had similar numbers completing 25 of his 43 passes for 255 yards, two touchdowns, and one interception.

Running back Zach Henshaw would break the century mark tonight carrying the ball 22 times for 107 yards. Regal, who has struggled with ball security, had 13 carries for 37 yards and an early fumble.

Meyers was the leading receiver for the Texans, catching eight passes for 168 yards and two touchdowns. Rhodes was right behind with seven catches for 134 yards and one touchdown.

The Texans would put up a total of 560 yards on the night. They had 133 rushing yards and 427 passing yards in the contest. West Texas would rack up a total of 360 total yards with 105 rushing and 255 passing.

This is the only Lone Star Conference team that coach Cary Fowler has not beaten, but tonight he changed that with a win. The last time the Texans beat West Texas was Oct. 30, 2004.

Tarleton extends their winning streak to eight games dating back to last season.  Also, this is the second game this season that the Texans have made an upset as well as noise in the Division II polls. We can expect Tarleton to move up the ranks into the teens while West Texas should fall back.

The Texans will Travel to Mississippi next Saturday as they face Delta Sate who defeated Tarleton on a game winning field goal last season at Memorial Stadium. A 6 p.m. kickoff time is set as Tarleton looking to keep their winning streak alive.