The Texans carried momentum from the last game into tonight in front of a sold out Wisdom Gym beating West Texas A&M 81-68.  The first half was a shooting clinic for West Texas A&M, however, as they shot 75% for three.  Even with those statistics on their side, the Buffaloes still were unable to pull out the win.

The Texans struggled in the first half to keep the Buffs from scoring but it appeared the other team was shooting into the ocean.  The Buffs started the half with a blistering 9-12 for three and shot 53.6% in total from the field.  The Buffs were unable to sustain such shooting and that was when the Texans were able to get their offense flowing.

After being down at half time 39-37, the Texans came out in the second half ready to impress the crowd.  Less than seven minutes into the second half, the Texans were up 56-47 and it would only get better for them from there.  The Texans did let the Buffs get close one last time on the night as West Texas A&M made it a three point game with just over nine to go, but from there the Texans widened the margin.

John Cathey-Macklin had the game high rebounds with 13 and six were on the offensive end.  Cathey-Macklin credited his teams’ intensity in the second half for the results. He also went 4-6 from the field scoring 8 points.

With only three regular season games left, Associate Head Coach Chris Reisman said the team must keep up their energy and be the team that punches the opponent first.  “You have to go one game at a time,” he said. “We have to go out there with the mentality once again to punch first.” 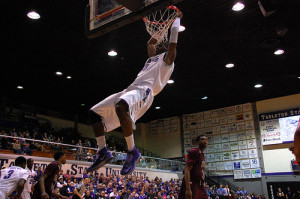 Davene Carter had 12 points on the night which included several dunks.
Photo by Azia Branson

On the game, the Texans shot 50% and their halves were pretty even shooting 48.4% in the first and 51.7% in the second.  In the second half, Tarleton was able to get some fast breaks and wow the crowd, once with an alley-oop off the backboard that Davene Carter slammed home.  The Buffaloes finished the game shooting 60% from three and 43.6% from the field.

The Texans head to New Mexico to play Eastern New Mexico in Portales before returning home for their final home game against Lubbock Christian next Wednesday.  The game Saturday in Portales is scheduled for an 8 p.m. tip.