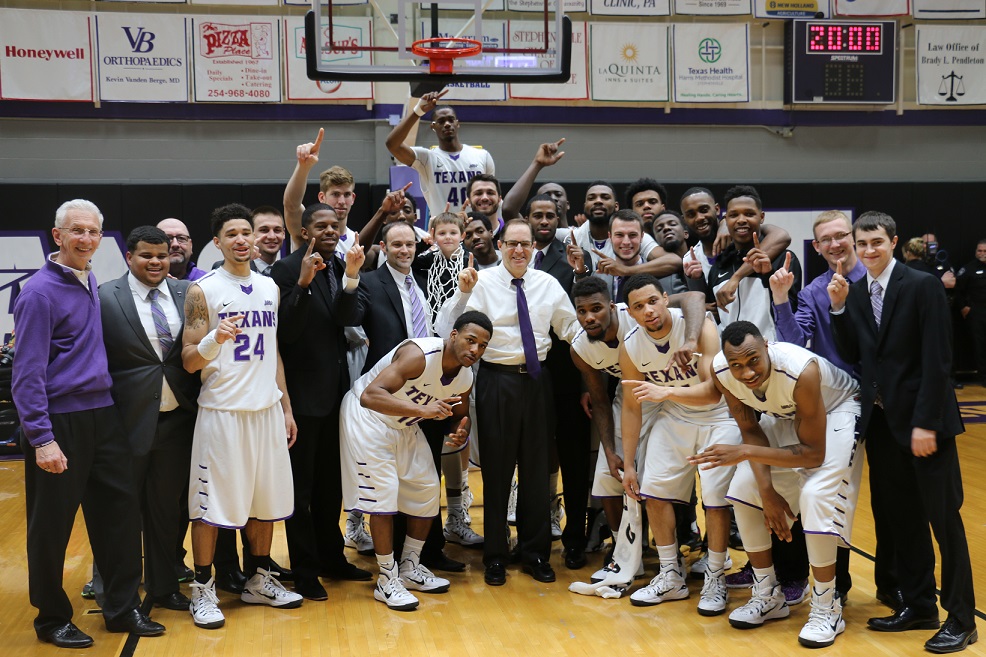 STEPHENVILLE – The Tarleton State Texans are outright Lone Star Conference champions. (25-2, 11-2) Tarleton State drilled (21-6, 9-4) Texas A&M – Commerce Saturday night in front of a rowdy capacity crowd at Wisdom Gym, 68-48. The win marked the first ever regular season outright LSC title for the Texans since the conference did away with divisions in 2011, and first since 2004.  They have now won four conference championships.

The Texans are currently the No. 1 team in the region, and will be the No. 1 seed for the conference tournament in Allen. Tarleton State has won 13-straight games and is now 53-5 dating back to last season. TSU will open the LSC tournament against Eastern New Mexico at 8:30 p.m. on Wednesday night at the Allen Event Center. The Texans have outscored the Greyhounds 154-119 in their two wins this season. 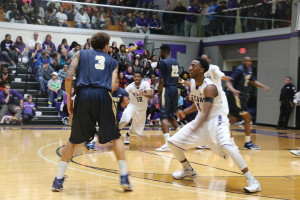 Commerce was held well below its season average of 80.8 points per contest by a physical Texan defense. LaDon Carnegie, the Lions second leading scorer, was held in check by freshman Nosa Ebomwonyi and fouled out late in the second half with zero points.

The Texas were again led in scoring by Mo Lee, who matched his career-high with 26 points. Malcolm Hamilton scored (13), Michael Hardge (8), Davene Carter (6), Damion Clemons (6), Ebomwonyi (4), EJ Reed (3) and Jakob Damstra (2) rounded out the scoring. Tarleton State shot 40-percent from the field and outscored the Lions 22-8 off of turnovers.

Tarleton State won the last meeting against then No. 25 TAMU – Commerce on the road, 77-73. TSU recovered from a 6-point halftime deficit to win its first of back-to-back road games over top-25 opponents for the first time in school history. Lee also led all scorers in that game, scoring 24 points on 8-13 shooting.

A Reed alley-oop to Carter got the capacity crowd on its feet and the Texans on the board. The two teams traded baskets, and TSU built a 19-13 lead. 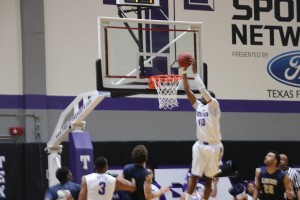 Carter with one of two alley-oops. Photo by Travis M. Smith

Two Lions instigated a light altercation at the eight-minute mark, and were both assessed technical fouls along with Reed. Lee made both free throws, and Carter’s tip-in after the inbounds pass completed a four-point swing in the Texans favor.

Both teams struggled to find their rhythm on offense, shooting an identical 33-percent through the first fifteen minutes of the opening half. A 6-0 TSU run over 2:58 seconds combined with a 4:16 minute scoring drought for TAMUC to build a 12-point lead, 29-17 with a minute and change to play in the half.

Lee provided the Texans with a momentum boost heading into the half, finding the bottom of the net from beyond the arc as the clock expired. Tarleton State shot 35-percent in the opening half, but had five three pointers and fourteen points off of turnovers. Lee’s 11 points paced the Texan offense that had built a 32-19 halftime lead. 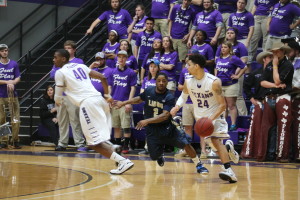 Hardge found Carter for an alley-oop after this pick-and-roll. Photo by Travis M. Smith

The second half started exactly the same as the first, except this time it was Hardge finding Carter for an alley-oop off of a pick-and-roll. After a Clemons free throw and a Hamilton lay-up, the Texans had built an 18-point lead, 41-25, with under 15 minutes to play in the regular season finale.

Lee converted an and-1 opportunity at the 10:38 mark and extended the Texan lead back out to 18 points. After three Lion free throws, Hamilton crossed over a defender and found Reed underneath for an easy two points. Hamilton got his chance for points on the next possession, and ripped a three through the net for a 51-33 TSU lead with 8:21 to play.

Damstra muscled his way to a rebound and bucket to put the icing on the cake. Tarleton led 64-40 and was three minutes and change from an outright LSC championship. The seniors still in the game, checked out with a little over 2 minutes to play and a 23-point lead. Tarleton State had to simply count down the seconds to its LSC title, and celebrated by cutting down the net after defeating TAMUC 68-48.