INDIANAPOLIS (AP) — With concealed weapons now legal in all 50 states, the National Rifle Association’s focus at this week’s annual meeting is less about enacting additional state protections than on making sure the permits already issued still apply when the gun owners travel across the country.

The nation’s largest gun-rights group, which officially opens its meeting of about 70,000 people Friday in Indianapolis, wants Congress to require that concealed weapons permits issued in one state be recognized everywhere, even when the local requirements differ. Advocates say the effort would eliminate a patchwork of state-specific regulations that lead to carriers unwittingly violating the law when traveling. 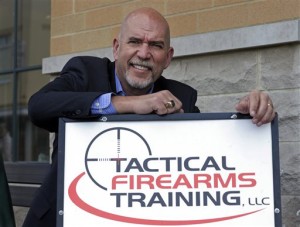 In this photo taken on Friday, April 18, 2014, Guy Relford, an attorney specializing in gun rights, poses outside his law office in Carmel, Ind. Redford is also the owner and instructor at Tactical Firearms Training teaching firearm safety as well as a comprehensive Indiana gun law course.
(AP Photo/Michael Conroy)

“Right now it takes some legal research to find out where you are or are not legal depending on where you are,” said Guy Relford, an attorney who has sued communities for violating an Indiana law that bars local gun regulation. “I don’t think that’s right.”

The push for reciprocity comes as the gun rights lobby is arguably stronger than ever before, with more than 5 million dues-paying members.

The NRA has successfully defeated numerous gun-control efforts in recent years, even after the 2012 massacre at Sandy Hook Elementary School in Connecticut. With midterm elections looming, the organization’s legislative wish list likely will be somewhat more modest than usual this year.

NRA spokesman Andrew Arulanandam noted that gun laws vary widely, with some states requiring strict background checks and a handful not even requiring a permit to carry a concealed weapon.

“It is vital because crime can and does happen anywhere,” Arulanandam said. “Just because an individual or a family crosses one state boundary to another doesn’t mean they are immune to crime.”

Much like drivers are required to follow the traffic laws of the states they’re in, Arulanandam says the legislation the NRA is seeking would ensure gun permit holders abide by the laws of states they’re visiting.

But Malte counters reciprocity could ultimately leave states “powerless” to stop even violent individuals who cross the state line with weapons.

Rubio opposed limiting Second Amendment rights after the Sandy Hook shootings but also has opposed some gun-rights legislation. Jindal last year signed a number of gun bills into law, including one that creates stiff penalties for those who knowingly publish the names of gun permit holders. He angered gun-control supporters in 2010 when he approved a law allowing concealed handguns in churches, synagogues and mosques.

Pence has been less forthcoming about his stance on gun rights since becoming governor in 2012 but signed a measure this year allowing guns in locked vehicles on school property.

Led by Obama, gun-control advocates called for background checks for all gun purchasers and a ban on assault weapons and high-capacity ammunition magazines following the Sandy Hook shootings. But a divided Congress denied the calls for change.

Republicans could pass some sort of reciprocity bill next year if they retake the Senate. However, Obama would almost certainly veto it, and the votes likely wouldn’t be there to override the veto.

An Associated Press-GfK poll in December found 52 percent of Americans favored stricter gun laws, 31 percent wanted them left as they are and 15 percent said they should be loosened.

Besides reciprocity, the organization also is seeking the right to carry legally owned guns on college campuses, which is prohibited in 27 states and the District of Columbia. NRA members have been vocally opposed to the appointment of Supreme Court justices deemed as sympathetic to gun control and have spoken out against an international treaty aimed at stemming the illegal weapons trade because they fear it could restrict civilian gun ownership.

Gun control remains the chief concern of the NRA and its members. The old bumper sticker adage that “If guns are outlawed, only outlaws will have guns,” still strikes a chord with many NRA members.