Number of Round Up volunteers more than doubled this year

On April 2, Tarleton State University students came together to give back to local residents of Stephenville during the 18th annual Tarleton Round-Up, which was inspired by Texas A&M University’s day of service, The Big Event. This year, Round-Up kicked off Tarleton’s Week of Service in which activities were planned throughout the week to benefit the community. Grace Lopez, the Tarleton Round-Up Public Relations Executive member, said they were expecting to have an increased number of volunteers and job sites this year. 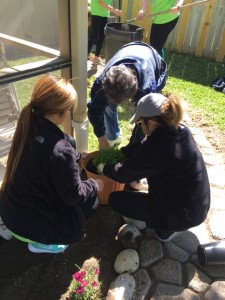 Lopez was right about an increase, as there was a total 147 projects and over 1,600 volunteers at this year’s Tarleton Round-Up. This record number of volunteers was twice the amount of volunteers from last year.

Round-Up, which is Tarleton’s largest single day service project according to Tarleton’s website, allows volunteers to perform a wide variety of services at job sites.

“A majority of the job sites are home to elderly citizens of Stephenville, so job tasks include raking leaves, gardening, cleaning windows, painting, and other various household jobs,” said Rachel Booth, a member of the Round-Up Public Relations committee. “Volunteers also go to the Stephenville museum, Cross Timbers Pregnancy Center, the Stephenville fosters home, and other non-profit organizations.” However, jobs that require power tools or engine-driven equipment will not be accepted.

If you’re interested in getting involved in Round-Up next year, it’s not too soon to start thinking about it.

“There are several ways to get involved with Round-Up other than volunteering the day of. Round-Up takes a lot of planning and organizing to prepare for the event,” said Lopez. “Students that wish to get involved can apply to be on the executive committee, where they are in charge of a specific part of Round-Up. Each executive member has their own committee to help with the different aspects that each require. All committee and executive members are there the day of the event to ensure that everything runs smoothly.”