NEW YORK (AP) — A police officer responding to a report of shots fired was killed during a gunfight and chase involving a stolen bicycle, and a suspect in his slaying was in custody, police said Wednesday.

“That’s about as bad as it gets,” Bratton said at an emotional news conference at Harlem Hospital early Wednesday. 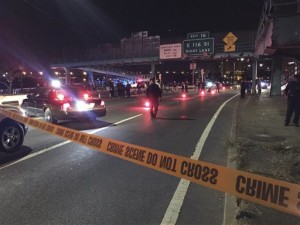 Police officers investigate along FDR Drive at East 120 Street on Tuesday, Oct. 20, 2015, in New York where a New York City police officer was fatally shot. Officer Randolph Holder, 33, died after being shot in the head in a gun battle while pursuing a suspect following a report of shots fired, police said.
(AP Photo/Michael Balsamo)

Dozens of Holder’s fellow officers stood outside the hospital and saluted as the ambulance carrying their fallen colleague left. Afterward, many embraced one another.

“Tonight, he did what every other officer in the NYPD does when the call comes — he ran toward danger,” Bratton said. “It was the last time he will respond to that call.”

The fatal shooting happened as Holder and his partner responded to a report of shots being fired at around 8:30 p.m. near a public housing development in East Harlem, in north Manhattan. When they arrived, a man and other witnesses said his bike had been stolen at gunpoint and the suspect fled with a group of people along a footpath heading north on the FDR Drive, adjacent to the East River.

The officers caught up to the suspect on a pedestrian overpass that spans the highway and traded gunfire. Holder was struck in the head, and the suspect fled down the river path near the highway. He was caught several blocks away with a gunshot wound in his leg, Bratton said. Police haven’t yet identified him.

Three others were taken into custody for questioning.

A law enforcement official said a bicycle and at least one gun were recovered, and shell casings from possibly three weapons were discovered at the scene. The official wasn’t authorized to discuss an ongoing probe and spoke to The Associated Press on condition of anonymity. It’s not clear whether more than one person fired on the officers.

“We are humbled by Officer Randolph Holder’s example, an example of service and courage and sacrifice,” Mayor Bill de Blasio said. “Our hearts are heavy. We offer our thoughts and our prayers to his family.”

De Blasio said Holder, who joined the force in July 2010, had an “exemplary record” as a police officer.

Holder was a native of Guyana. He worked in the NYPD division that polices the city’s public housing developments. His father and grandfather were police officers in Guyana, Bratton said.

Patrolmen’s Benevolent Association President Patrick Lynch said: “New York City police officers every day go out and carry themselves like superheroes, but the reality is when we’re attacked, we bleed, when we bleed, we die and when we die, we cry.”

Nationwide, 100 officers have died in the line of duty so far in 2015, up 15 percent from this time last year, according to the National Law Enforcement Officers Memorial Fund, a nonprofit law enforcement information clearinghouse. Of those, 31 were firearms-related deaths. Texas has the most deaths with 10. New York state is sixth.

In New York City, Officer Brian Moore was killed May 9 during a patrol. A suspect was charged with murder. And on Dec. 20, officers Wenjian Liu and Rafael Ramos were ambushed and killed by a man who said he wanted to kill some cops in Brooklyn. The suspect killed himself in a nearby subway station.