Ahead of his remarks to the American people, Obama planned to meet Tuesday with congressional leaders from both parties. White House officials have said Obama wants “buy-in” for his strategy from lawmakers, but they have not specified what that means or whether the president will seek an authorization for use of force.

There was also no consensus in Congress on whether Obama needs new authorization to attack the militants. Some lawmakers say the president has the authority under the Constitution and no new vote is necessary. Others are reluctant to vote weeks before midterm elections.

House Speaker John Boehner said Tuesday that the militants pose a serious threat that must be dealt with in Iraq, Syria or wherever they exist. However, he said no decision would be made on whether Congress votes until Obama lays out his plan. 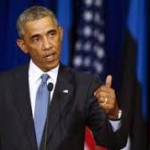 Senate Minority Leader Mitch McConnell, R-Ky., called on Obama to identify military objectives and explain how they will be accomplished.

“He needs to present this plan to the Congress and the American people, and where the president believes he lacks authority to execute such a strategy, he needs to explain to the Congress how additional authority for the use of force will protect America,” McConnell said. “The threat from ISIL is real and it’s growing. It’s time for President Obama to exercise some leadership in launching a response.” ISIL is an alternative name for the militants.

Senate Majority Leader Harry Reid of Nevada and House Minority Leader Nancy Pelosi of California will represent Democrats in the meeting with the president.

The U.S. is already launching airstrikes against Islamic State targets in Iraq, action taken at the request of the Iraqi government and without formal authorization from Congress. But the mission the president is expected to announce would be more expansive and could extend into Syria.

The White House said Obama would speak Wednesday at 9 p.m. EDT from the State Floor.