Eddie Ray Routh confessed to murdering Chris Kyle and Chad Littlefield because “they wouldn’t talk to me,” according to Officer Gene Cole, formerly with the Earth County Sheriffs’ department.

Cole said he was called in to provide back-up while Routh was performing the activity in case there was any danger to the other officers. Cole also stated that he was aware that Routh was being held on capital murder charges, but had no prior knowledge of his mental issues.

As noted during day one of the trial, Kyle and Littlefield exchanged the following text messages on the way to Rough Creek Lodge while Routh was in the backseat:

“This dude is straight-up nuts,” Kyle said. “He’s right behind me, watch my six,” Littlefield replied referring to a military term for watching someone’s back.

James Watson, the uncle of Eddie Ray Routh, confirmed that the two smoked marijuana prior to Routh leaving with Kyle and Littlefield. Watson said the two smoked a “bowl full” or two of “better than average” weed shortly before Routh’s departure. “I don’t remember drinking any whiskey that morning, but that doesn’t mean I didn’t,” Watson said. He also felt that it wouldn’t be out of character for the two to drink whiskey in the morning.

Jen Weed, Routh’s fiancé, called Watson early on the morning of the murders and asked him to come over to Eddie’s mother’s home to “calm him down” because “they were having an argument.” Watson, who resides in Alvarado, arrived at the home around 8 ‘o’clock that morning and found Routh there alone in fairly good spirits. The two talked spiritually for some time, with Watson saying he even played Eddie a hymn from his cell phone as the two talked.

They were sitting on the back porch when Watson heard footsteps walking up the gravel drive. Watson said Routh went out to meet them and never returned, leaving the house unlocked and without saying bye. In passing, Routh had mentioned to his uncle about his plans to go with Chris Kyle to a gun range that day. Watson locked the house and returned to his home in Alvarado. 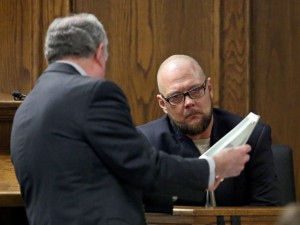 Later that same afternoon, Routh entered Watson’s home and asked him to “look at this gun.” The gun was the Sig Sauer p226 MK5 9mm hand gun with an anchor etched into the slide that was used to kill Chad Littlefield. According to Watson, the two visited for a few minutes before Routh told him that he was “driving a dead man’s truck.” Taya Kyle, widow of the ‘American Sniper’, was again brought to tears after this comment. The comment “didn’t strike me as unusual then but it does now,” said Watson noting that he thought Routh was referring to himself as the dead man.

During the morning session, Texas Ranger Anthony Armstrong gave insight into the condition of Routh’s home. Armstrong was already en route to Lancaster when he heard over the radio of the car chase involving Routh. He secured Kyle’s truck with evidence tape and went to the Lancaster police department.

After obtaining a search warrant in the early morning hours of Feb. 3, 2013, Armstrong and three other Rangers entered the home. Armstrong noted that the house smelled of marijuana upon entering. His search of the residence resulted in the finding of multiple ceramic pipes, a bong, a “leafy green substance believed to be marijuana,” an almost empty bottle of Texas Crown whiskey on the dining room table with a cup sitting beside it, a vial of unidentified liquid and other drug paraphernalia. Besides the whiskey, all of the items found were in Routh’s bedroom.

Garland DPS ballistics expert James Jeffress was also called to the stand and confirmed the murder weapons to be the 9mm and the Springfield XD auto .45cal pistol. He also confirmed that the Sig Sauer 9mm fragments were only pulled from Littlefield and the .45cal from Kyle.

Jeffress tested all 10 guns that were found at the gun range at Rough Creek Lodge and the two found inside Kyle’s vehicle, the fully loaded 9mm and the Springfield 30-aught-6 rifle, and found that no long rifle was shot at the range. The Sig Sauer 9mm, the .45cal Springfield pistol, and two Cimmaron bolt action pistols were confirmed by Jeffress to be the only weapons fired that day.

The trial is expected to continue late into next week, and will resume again on Monday at 8:30 a.m.