Official: Unconfirmed report of shots at Navy Yard in DC

WASHINGTON (AP) — A lockdown was underway Thursday morning across the Washington Navy Yard campus after reports of shots fired, but a senior law enforcement official said those reports had not been confirmed.

No injuries have been reported, said the official, who was receiving detailed briefings but spoke on condition of anonymity because the person was not authorized to discuss developments with reporters. 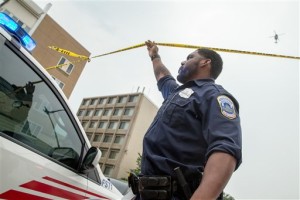 A helicopter hovers above a police officer holding up police tape for a vehicle as a large police presence gathers along M St. Southeast in Washington, Thursday, July 2, 2015, near the Washington Navy Yard campus. The Washington Navy Yard was on lockdown Thursday morning after reports of gunshots, but a senior federal law enforcement official says there has been no confirmed report of any shooting.
(AP Photo/Andrew Harnik)

The building is the same one where a gunman killed a dozen workers in a rampage two years ago, according to a second official — a federal one who spoke on condition of anonymity for lack of authorization to discuss details publicly.

Navy security saw surveillance video of two people jumping the fence in the vicinity of the building a couple of minutes before the first report of gunfire, the federal official said.

Security found no one inside the building, the official said.

A heavy police and fire department presence began blocks away from the Navy Yard, with roads blocked and a helicopter hovering overhead. Gates to the Navy Yard are closed, and all people are being advised to shelter in place, said Chatney Auger, spokeswoman for Naval District Washington.

Thousands would be at the base at the time of the reports, Navy public affairs officer Chris Johnson told reporters outside the facility.

In September 2013, military contractor Aaron Alexis killed 12 civilian workers at the Navy Yard’s Building 197 before he was fatally shot by police. The building has since been renamed the Humphreys Building. It reopened this year.

When facilities specialist Chris Robertson heard an alarm and loudspeaker instructions about 7:30 a.m., he said his first thought was: “Here we go again.”

He said his supervisor called at 7:33 a.m. and told him and his two co-workers to leave. He also said he hadn’t noticed anything unusual Thursday morning — everything was normal.

The Navy Yard, in southeast Washington, is the country’s oldest naval installation.