WASHINGTON — A Libyan who has been held and interrogated for a week aboard a U.S. warship is now in New York awaiting trial on terrorism charges, U.S. officials said Monday.

The al-Qaida suspect, known as Abu Anas al-Libi, has been under federal indictment in New York for more than a decade. He’s due to stand trial over whether he helped plan and conduct surveillance for the bombings of U.S. embassies in Africa in 1998. 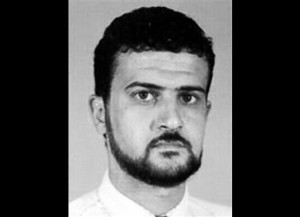 This image from the FBI website shows Anas al-Libi. Gunmen in a three-car convoy seized Nazih Abdul-Hamed al-Ruqai, known by his alias Anas al-Libi, an al-Qaeda leader connected to the 1998 embassy bombings in eastern Africa. Wanted by the U.S. for more than a decade, he is now in New York awaiting trial on terrorism charges, U.S. officials said Monday.
(AP Photo/FBI)

Two U.S. officials said he arrived in New York on Saturday and has been held while he awaits an arraignment in federal court.

Al-Libi would be the latest in a string of defendants to face civilian trials under President Barack Obama. Early in his term, he faced criticism for planning to prosecute admitted 9/11 mastermind Khalid Sheikh Mohammed in New York.

Since then, however, the city has hosted the trial of Ahmed Ghailani, who received a life sentence on a terrorism charge in 2011.

Al-Libi, whose full name is Nazih Abdul-Hamed al-Ruqai, could be in court as early as Tuesday, officials said. But there were no new public court filings in his case.

The officials insisted on anonymity because they were not authorized to publicly discuss the matter.

Al-Libi used to be on the FBI’s list of most wanted terrorists. His family says he was not in al-Qaida.

U.S. special operations forces snatched him during a raid in Libya on Oct. 5.