Tarleton State University student and senior business management major, Taylor Brittain, has big plans for her online boutique “The Wild Ride”. Brittain is in partnership with her father and gets free help from her best friend, Megan Whitehead. 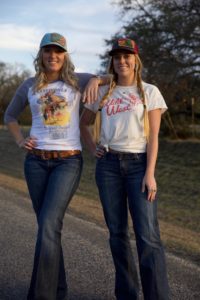 Although the online boutique has only been around since mid-February, Brittain hopes to open a store after she gains online success and a customer base.

Brittain grew up helping her mother with a boutique she owned for 10 years. However, her father’s travel boutique is where she got the name The Wild Ride.

Originally, Brittain didn’t think she would start her boutique until she could manage it on her own.

Her father approached her and asked, “Why don’t we start an online one together – you basically run the company and I’ll help you?”

Unsure about whether they were actually going to start the boutique, Brittain said it has all come together really fast. “…we just decided to just do it,” she said.

Whitehead helps with the behind-the-scenes tasks.

“She’s my best friend and she helps me get my name out there,” said Brittain. “When I start going to shows and events to do stuff, she’s going to help me – help me set up, help me break down, all that kind of stuff. So, she’s a lot of help for me for sure. She…I would struggle without her, honestly.” 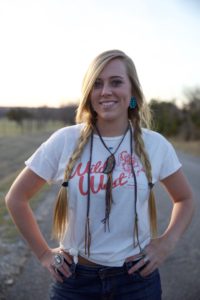 Taylor Brittain, owner of “The Wild Ride” boutique that launched in February. Photo by Jackson Riggs

One goal Brittain has is to sell out her stock a lot quicker than she does now.

Brittain also explained the process of how she gets her clothes.

“I order (clothes) from vendors,” she said. “I went to the Western Apparel Market in Denver in January, and that’s when I first ordered all the clothes that I have right now. Then I’ll go to (the) Dallas Market, which they have in Jan., June and August. Basically, what you do is you go (buy from) all these vendors, clothing brands such as Cinch, Rock ‘n Roll and other small brands that you can order from to sell their clothes in your store.”

Brittain doesn’t necessarily want to design her own clothes but has plans to “design t-shirts with our (boutique) name on them at some point.” If the company gets “big enough, we want to create shirts that say, “The Wild Ride,” with a cool vintage design.”

Along with Whitehead’s willingness to help, Brittain has a strong support system behind her at home. 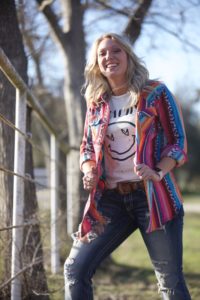 Best friend Megan Whitehead. Whitehead helps Brittain with the behind-the-scenes tasks of running the boutique and spreading the word. Photo by Jackson Riggs

Even though Brittain is looking to graduate in May, she is “almost positive” she is going to get her master’s degree next year. Brittain said going for her master’s degree would also give her more time to continue growing her success and spreading the word about her boutique.

For more information on The Wild Ride, visit facebook.com/thewildride18/