The main talking points during the forum were concerns with obtaining means to fund the transition, as well as long-term support from donors and sponsors to sustain a new program.

“If you’re going to do this, you’re going to have to be consistent in the philosophy, (meaning), this is not five years, this is 50 years,” Engel said, regarding dedication to funding the transition.

Bauer began his speaking session by stating an opinion on his involvement with the Task Force’s discussion.

“The last time I went to a football or basketball game of my school was never. I think that all college and school athletics are irrelevant,” Bauer said. 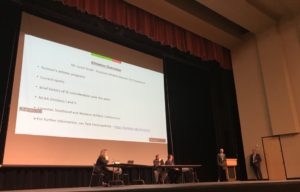 Bauer then presented a situation analysis comparing projected budgets for Division I and II through the 2022-2023 school year. He said overall revenue made little difference in comparison between the two divisions.

Costs standing between the university and the ability to accept a potential invitation is $1.61 million. Though Bauer, Engel and Mosley expressed their concern with Tarleton’s ability to afford the transition, Beaty seemed confident in possible methods the university would use to produce funding.

“We would work with Coach Reisman to come up with a budget that works within the revenue that he anticipates bringing in,” Beaty said.

One of the two methods Beaty presented was utilizing Texas A&M University’s Treasury Services to help cover the costs of the transition and allow time for fundraising.

“Coach Reisman has expressed that he feels like there are donors willing to step up and assist with that cost. It may be difficult to get that done quickly enough, so we could use financing through the A&M system to buy us some time to do that,” Beaty said.

The other option is expanding the athletic fee to non-Stephenville campuses and students, potentially removing the no waiver. If the university chose this method, pending an invitation to a Division I conference, it would bring in $1.4 million in additional revenue annually.

The recreational sports fee of $100 per regular semester and $50 per summer semester is used to fund debt service requirements and operational costs of the facility. This fee is assessed to the Stephenville Campus. Intercollegiate athletics fee of $22 per semester credit hour, with a $286.00 maximum per semester, is used to support intercollegiate athletics at Tarleton State University. This fee is assessed on Stephenville courses.

“The university has the ability to, at any point, remove that waiver and charge all students,” Beaty said.

After Beaty concluded budget considerations, Rick Richardson, Interim Vice President of Finance & Administration and Task Force Chair, answered questions from the audience— all of which can be found online via the Division I transition FAQ.

“The final decision-maker is Dr. Dottavio. He’s got to weight a lot of things,” said Richardson.