While some believe it’s impossible these days to have civil discussions and debates, Tarleton State University student James Bessler is providing his peers with just the opposite.

Bessler, a sophomore majoring in mechanical engineering, decided to create a forum he calls “Open Room” where people can peacefully come together and engage in conversation about controversial topics and current events.

Now running on its third semester, Bessler says before Open Room, there wasn’t a place for students to freely express and discuss their opinions on hot topics. 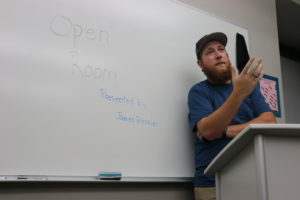 Bessler says he wanted to invite people to a spot to argue and debate their opinions. Photo by Latricia Powell

He said he was inspired by one of Dr. Paul Stafford’s classes. Bessler says Stafford, an assistant professor in the Department of Communication Studies, dedicates the first ten minutes of his class to a segment he calls “What’s going on in the world?” Texan News attended the session on Sept. 18 to get a glimpse of how the meetings are run and what sort of topics are discussed.

In this last meeting, one of the topics was where the line is drawn when it comes to freedom of speech in terms of threats, jokes, and other forms of expression about the president. They also discussed the issue of hate speech vs. free speech.

One student said that people shouldn’t be prohibited but should be held to their words.

The group also touched on the topic of college campuses and free speech, talking about bullying, protests and counter protests, and whether certain speakers should be allowed to speak on campus.

“Don’t protest with your own form of hate speech,” said one student.

“Make your beliefs expressive, but not violent,” said another, adding that turning the other cheek also becomes counterproductive on things that matter.

While some topics may be very controversial and the difference of opinions may become heated, yelling is not allowed in Open Room because, Bessler says, people shouldn’t yell in the real world.

“The whole point of Open Room is to come to a place once a week where your ideas and opinions are going to be challenged,” said Bessler.

He says he usually comes up with what topics he plans to present to everyone the Friday before the meetings.

Open Room meets every Monday at 9 p.m. in the Honors Hall classroom 1245A.

The meetings last an hour but students are welcome to stay a little longer to continue with their discussions.

This forum is not an official school organization.