Opinion: A More Conservative Look at the Tarleton Panel Discussion

Thursday night, in the Fine Arts theater, six of some of Tarleton State University’s faculty members formed a panel to discuss some of the issues they think are important, and how our newly elected President Trump would affect those issues.

The six faculty members included Dr. Malcolm Cross who has a Ph.D. from the University of Missouri and teaches courses such as Presidency, Elections and Political Science at Tarleton State University. 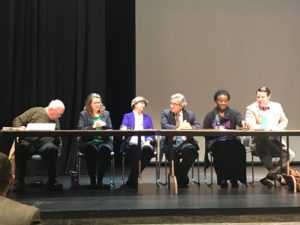 The panel consisted of 6 Tarleton professors. Photo by Texan News

Dr. Cross gave very interesting views on different topics such as how much of Washington the Republicans now have control over since Donald J. Trump was elected President.

“This 2016 election marks the columniation of a major GOP come-back from the disastrous elections the congressional elections of 2006, and the Presidential election of 2008. Over the past eight years, Republicans have been systemically trying to comeback. Today, the Republican party has the White House, both houses of Congress, at least one of the three elected institutions – governorship, or senate, or House of Representatives, or some combinations,” said Dr. Cross.

In a Republican’s eye, especially if that Republican is pro-Trump and did not vote for him because he was ‘the lesser of two evils’ makes for a very exciting time. President Trump dedicated most of his campaign speeches to reforming immigration, our economy, and our healthcare – he promised to do that and much more in a way that is best for our country and under budget.

Dr. Cross also commented on the American media and why they objectify so much of national and international news.

“The thing you have to understand about the American media is that they are privately owned. The first thing, which has been verified by public opinion polls, is that most journalists are democrats. Journalists want to be objective. The second thing is that news companies, whether it be television, radio, magazines or newspapers need to make a profit. If they don’t, they will go bankrupt. By being objective means they have to cover horse race politics – who said what, who is leading in polls, what are they doing with their time, etc. Journalists are not going to report on boring stuff like reforming trade policy, no one wants to listen to that. This means journalists are going to reports the gory, the sensational, the scandal – if it bleeds, it leads,” said Dr. Cross.

It has become extremely obvious that there are only two types of mainstream media – liberal and conservative. During the campaign process, the liberal media was accused of and proved to report Pro-Clinton news. The conservative media would mostly report on what Donald Trump was saying and doing. This came with objectification on both sides.

At the end of the discussion, I was able to ask Dr. Cross what he would like to see from the Trump Administration.

Overall, this discussion event was full of diverse questions from students at Tarleton State. There was definitely an optimistic vibe in the room at the end of the night.