Opinion: I’m a transfer student and parking here is a dream

As a transfer student, Tarleton State University was a big change from Texas State University. Just when I got comfortable at my original college, I packed up my bags and moved to Stephenville. Now I have to get used to new traditions, a new campus and a new city.

There are many differences between Texas State and Tarleton, but one really surprised me— parking. 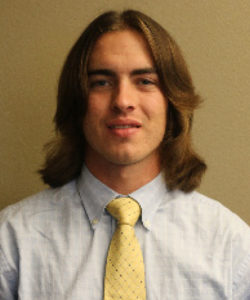 At Texas State, parking was one of the biggest problems the university faced. Texas State was bringing in more people than they could put on their limited acreage and when more dorms needed to be built, parking got the boot. The parking situation was a nightmare— even if you got a parking permit.

If you live on campus at Texas State and want your car to be within walking distance, you better be willing to pay. According to Texas State’s website, a Residential Pass will run you $485 a year, granting you access to most of the lots on campus, including four of six parking garages. However, one draw back is that your parking permit cost is not included in your tuition, but must be paid separately. Whereas at Tarleton, parking permits are included in the tuition and fees.

So let’s say you didn’t have that money to spend, you could pay for the Gold Pass at Texas State. At a $115, a Gold Pass would put you at a conveniently located lot, which according to Google maps, is just 1.28 miles away from campus. Now to get to this parking lot, you could walk the mile and more or you could take the Mill Street bus, that conveniently doesn’t run on Saturday or Sunday. 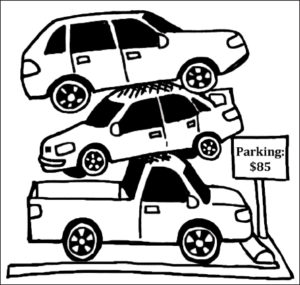 Tarleton parking permits are included in a student’s tuition. Cartoon by Sammie Wight

What many Tarleton Texans don’t realize is that campus parking problems can be much worse than we have it. According to Tarleton’s website, there are 12,326 students, 506 staff and 672 faculty members converging onto campus and there are an estimated 1,257 green zone spaces, 1,025 blue zone spaces, 2,227 red zone spaces and 740 purple zone spaces for a total of 5,249 spaces for students, faculty and staff.

It could be way worse though. According to the University of Texas at Austin’s website, there are nearly 16,000 parking spaces for the daily requirements of the 70,000 students, faculty, staff and visitors.

Parking at Tarleton may seem like it’s bad but it can be much, much worse. Sure the spots can be a little out of the way but they’re there. Instead of looking through multiple parking lots, parking garages and wasting time as students on other campuses do, we know there will likely at least be a spot in the back of our lots. Sure, Tarleton parking may not be the most convenient, but at least it’s there and that’s more than most college students can say.